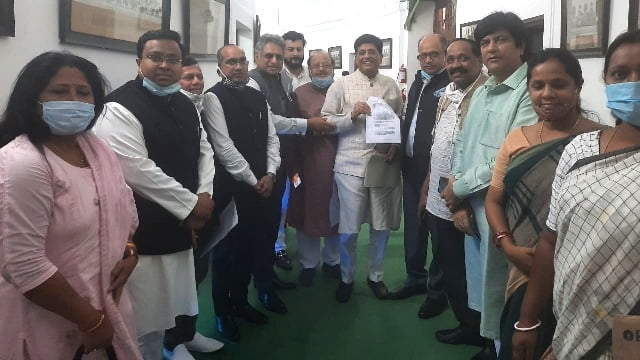 Bhubaneswar: A delegation of MPs of the Biju Janata Dal met Union Minister for Food and Civil Supplies Piyush Goyal on Monday and urged him to expedite paddy evacuation and pending subsidy.

Goyal assured the delegation to take it up the matter with the Centre and ensure that the legitimate demands of Odisha are fulfilled.

During the meeting, the delegation told the Union Minister that due to non-release of subsidy by Department of Food and Public Distribution of the Centre, Odisha State Civil Supplies Corporation (OSCSC) has so far borrowed Rs 19,000 crore to run paddy procurement programme by way of upfront investment.

Due to non-release of pending subsidy, the Corporation with pending subsidy claims of Rs 5,616 crore towards provisional and advance subsidy, has exhausted all resources including the sanctioned limit of bank finances and incurred a huge interest burden with a cumulative loss of about Rs 1721.16 crore.

On the issue of delivery of rice, the delegation said Odisha became a DCP (Decentralised Procurement Scheme) state in Kharif Marketing Season (KMS) 2003-04, taking up the responsibility of procuring paddy directly from the farmers and has become the fourth highest contributor of foodgrains to the central pool due to consistent efforts of the government in extending the outreach of the MSP (minimum support price) programme.

Referring to the procurement of parboiled rice, the delegation said Odisha is primarily a parboiled consuming state as it is consumed by the people in 24 out of 30 districts.

While Odisha’s own consumption under PDS (public distribution system) and other welfare schemes is about 24 lakh metric tonne (LMT) of parboiled rice, the estimated surplus that needs to be evacuated by the Food Corporation of India (FCI) in the current KMS would be 30 LMT. But, as the FCI till March 13, 2021, has evacuated 6.65 LMT of parboiled rice, the movement plan for the month of March 2021 has been reduced substantially.

Maintaining that the surplus 30 LMT of parboiled rice cannot be evacuated by the start of next KMS or till the start of next calendar year if the FCI procures at this pace, the delegation said this will greatly hamper the ensuing Rabi procurement and the next Kharif procurement as the overflowing storage capacity of about 7.2 LMT cannot accommodate this rice.

Moreover, the long storage of rice will lead to discolouration and not be accepted by the FCI while supplying this rice under NFSA/SFSS to the people of Odisha will be unethical. Further, due to non-evacuation of surplus rice, the mills will come to a halt and the lifting of paddy from mandi to the mills will be severely affected.

Stating that the loss of 1 LMT of rice due to deterioration in quality amounts to Rs 320 crore, the BJD MPs told the Union Minister if the FCI, like the previous year, lifts only 17 LMT of parboiled rice, the state will have 13 LMT of surplus rice with a loss of Rs 4160 crore.