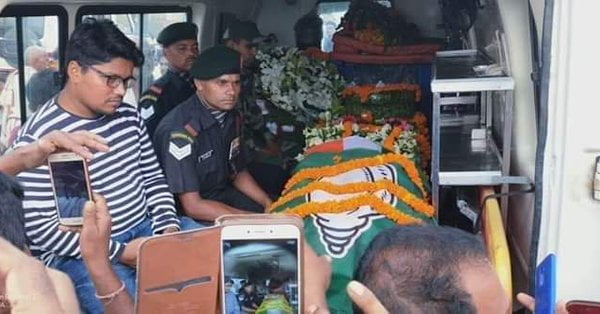 The BJD has ordered an enquiry into the incident of its flag being placed on the coffin of Odia martyr Ajit Sahu. The party has suspended Binod Kumar Majhi, Santosh Kumar Sahu and Gobardhan Das of the party’s Cuttack district unit under suspension in this regard, says a press release issued by BJD general secretary Bijaya Kumar Nayak.

Earlier in the day, the BJP had condemned the BJD for draping its party flag on the coffin.

“Draping the party flag on the coffin of a martyr is an insult to the country. This is not the first incident that the BJD has indulged in such an act. Earlier, a BJD MLA had shoved the kin of the Pulwama terror attack martyr, Manoj Behera, during his cremation at his native village Ratanpur in Cuttack district on February 16. The BJD supremo must take this incident seriously and take stern action against his party workers,” Bastia had said.

Martyr Ajit’s brother Parameswar Sahu said some BJD workers had draped the party flag on his brother’s coffin at Khuntuni. Though he later removed the party flag, he said, those present there took photos on their cellphones and made it viral on social media.

“My brother has laid down his life for the country, not for any party. This photo should not be circulated on social media and the administration should take necessary action in this regard,” Parameswar had said.

Earlier, BJD spokesperson Sasmit Patra had said: “We strongly condemn the incident and appropriate action will be taken against those involved in it.”

BMC Gets New Commissioner In Major Bureaucratic Reshuffle In Odisha