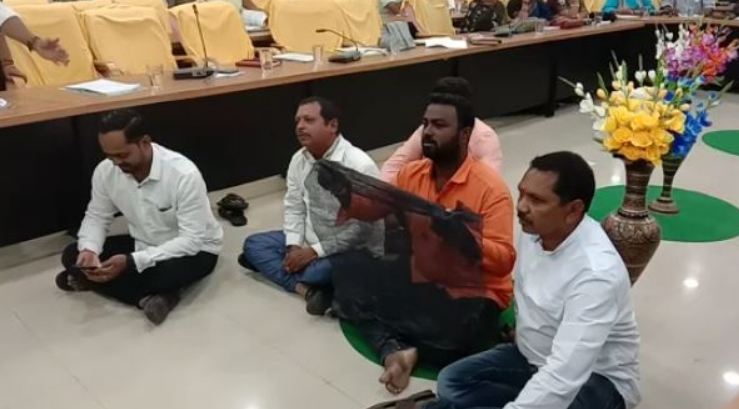 Cuttack: Uproarious scenes prevailed at the council meeting of the Cuttack Municipal Corporation (CMC) on Tuesday as BJP corporators created ruckus and showed black flags to Mayor Subhash Singh, accusing him of having failed to ensure development works in the millennium city.

Alleging that the Mayor is functioning in an arbitrary manner, the saffron party corporators staged a sit-in and claimed that the CMC was apathetic towards works related to sanitation, drainage, road repair and street lighting though Durga Puja festival is fast approaching.

Accusing Singh of adopting a discriminatory approach, they told reporters later that the meeting was meant only to benefit the Mayor and BJD corporators. Though around six months have elapsed since the Mayor assumed office, no concrete step has been taken for the development of different areas in the city, claimed Deepak Das, a BJP corporator.

The civic body is not paying due attention to the demands of the corporators for providing necessary facilities to the people, while tenders are not being floated for developmental works, he claimed.

Roads in the city present a pathetic look due to sub-standard work and lack of maintenance, while the civic body has failed to gear up and launch preparation for the upcoming puja season, said another BJP corporator.

Mayor Subhash Singh, however, maintained that the CMC has been working round-the-clock for the development of the city. Preparations for the Dusshera festival are progressing on a war footing with the cooperation of all and the roads will be given a new look before the Durga Puja, he said.

The civic body had made necessary arrangements for Ganesh puja and now necessary steps are being taken for Durga Puja, he said, adding that all corporators should extend cooperation in this regard.

Rain To Drench Bhubaneswar, Cuttack & 9 Odisha Dists For Another 3 Hours

Come, Experience The Grandeur Of Jodhpur Palace At This Puja Pandal In Bhubaneswar