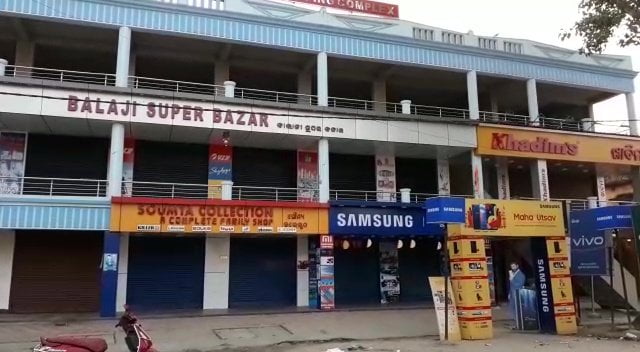 Following the 6 am to 12 pm bandh call, all trading establishments remained closed. Educational institutions, hospitals and banks, however, ran as usual. Vehicular traffic in the town was reported to be normal.

“People of Sundargarh know Dr Patel as a sincere and dedicated doctor. He never opened a private clinic and attended to people as and when needed. We strongly protest the decision of the 5T secretary VK Pandian to suspended him,” said a local.

Talking to the mediapersons, Bata Kishore Mishra, president of the Sundargarh district BJP unit, said the 5T secretary did not inquire about the acute shortage of doctors, anaesthesia specialists and technicians in the hospital. Though he took the feedback of the patients, he did not inquire into the causes behind these allegations before suspending the in-charge CDMO for healthcare negligence.

“The decision reeks of political vendetta since Sundargarh is a BJP bastion,” he pointed out.

“The bandh call was not given for any political reason. Rather it is an outcome of the anger of the people of Sundargarh district against the 5T secretary, who arbitrarily suspended Dr Patel who is a sincere and committed doctor. We strongly protest the unilateral decision of the 5T secretary and want to ask him why several posts of doctors are lying vacant in the district headquarters hospital and other government hospitals in the district,” said a local BJP leader.

Notably, Pandian along with a five-member team had visited the district headquarters hospital in Sundargarh on Sunday. During his interaction with patients, they had alleged that the medical authorities asked them to conduct pathological tests in private diagnostic centres. They had also complained that no cooked food was being provided by the hospital authorities.

Later, in the day, the state government placed Patel under suspension and served a show-cause notice on the district collector Nikhil Pavan Kalyan for lapses in the implementation of Mo Sarkar programme in the hospital.

Protesting against suspension of Patel, the BJP activists took out a rally in the evening and burnt the effigies of the Chief Minister, Health and Family Welfare minister and the 5T secretary.