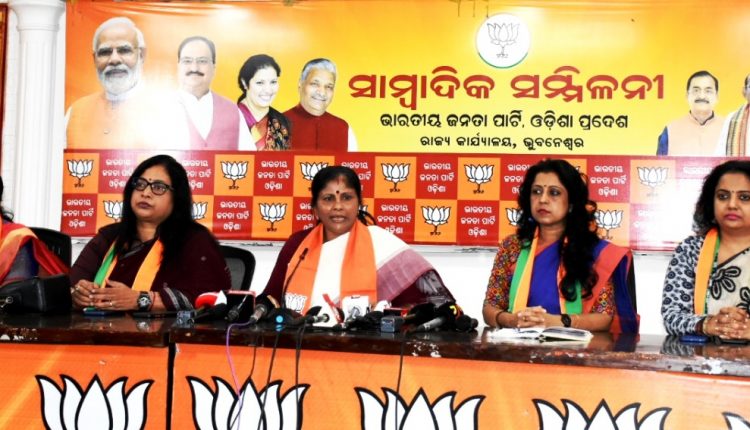 Bhubaneswar: Amid a row over the mysterious death of woman cricketer Rajasree Swain, BJP on Sunday lashed out at the Odisha Cricket Association (OCA) and Sports Minister Tusharkanti Behera accusing them of being insensitive and callous.

Addressing a press meet in Bhubaneswar, Odisha BJP women wing president Smruti Patnaik said as Rajasree hailed from the Minister’s panchayat in Kakatpur area, the local Sarpanch and samiti member had contacted him for help after she went missing.

However, instead of extending any help to the worried family, the Minister showed indifference by telling them that he was extremely busy with Hockey World Cup, she claimed.

Claiming that Rajasree’s parents had also approached Behera several times in the past seeking his help for their daughter, the BJP leader alleged that the Minister never tried to support the talented player for her career growth.

“All these amply prove that the BJD government in the state is anti-women. Its call claims about women’s empowerment is just a slogan to mislead people,” Patnaik alleged.

Hitting out at OCA, she said it is surprising that the woman cricketer went missing for two days but the OCA neither lodged a complaint nor informed her parents about this, she claimed, adding that OCA lodged a complaint at Bangalabag police station in Cuttack only after the parents of Rajasree filed an FIR in Kakatpur.

Seeking to know as to who was looking after the women cricketers in their hotel, she said the manager of Rajasree’s team should come to the fore.

There should be a high-level investigation to ascertain the circumstances that led to the death of Rajasree, the senior BJP leader said.

Meanwhile, police have stepped up the investigation. A team led by Athagarh SDPO and Gurudijhatia IIC had visited Rajasree’s village and questioned her family members. The team reportedly recovered a diary from her house. Police will also examine her handwriting.

Rajasree had gone missing on January 11, a day after she failed to make it to the final list of 16 players for the BCCI Senior Women’s one-day trophy. Locals spotted a scooter and helmet on the Bramhanabast-Kapursingh forest road on January 12 and informed police, which started searching for her and later found her hanging from a tree on January 13.

Though the police suspect it to be a case of suicide, family members of Rajasree alleged that she was murdered “as the body bore injury marks and her eyes were damaged”.

Makar Sankranti: ‘Curse’ Ritual Against Britishers Continues In This Odisha Temple For 173 Years