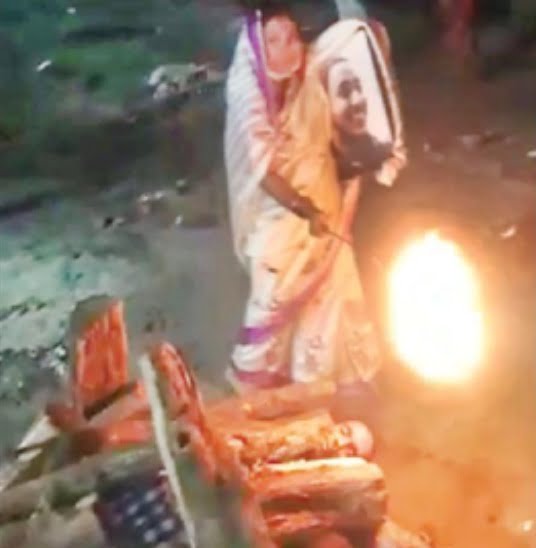 Take the case of Amiyabala Parida, for instance. The Odisha lecturer recently broke tradition to herself perform the last rites of her husband, holding a photograph of her dead son in one hand at the  crematorium.

A resident of in Patrapada area in Bhubaneswar Amiyabala and her husband Chandi Prasad Bagh lost their son Girija Prasad in a road accident last May. Six years before that, former Indian Navy official Chandi Prasad suffered a brain stroke, leaving him paralysed and bed-ridden.

Amiyabala had no option but to look after her ailing husband. The death of their son last year came as another massive blow, but she overcame that indescribable loss and continued her duty.

On May 3, however, Chandi Prasad breathed his last. Her grief can hardly be put, into words, but she steeled herself to perform her last duty, which her son (if alive) or relatives would have done under normal circumstances.

“Both my husband and son departed the world, leaving me all alone. Probably, it was God’s will. I could not control my tears, still had to lit the funeral pyre holding a photograph of my dead son to fulfil my husband’s last wish,” Amiyabala was quoted as saying in a choked voice.

Despite losing the two most beloved persons of her life, Amiyabala has not given up on life and set up two charitable trusts in their names to contribute towards social service. She had started a charitable trust which caters to road safety awareness programmes after her son’s accidental death.

On Mother’s Day, you can only salute a braveheart like Amiyabala.

She can be an inspiration for millions of women.