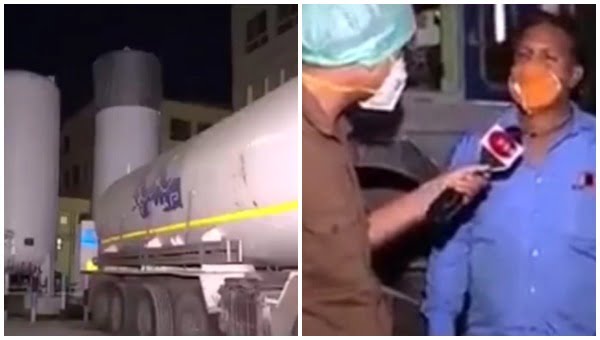 Bhopal: A tanker driver, Veer Singh, drove 25 hours non-stop covering a distance of 1180 km from Odisha’s Rourkela to Sagar in Madhya Pradesh, to deliver oxygen to hospitals in the state grappling with a shortage.

Singh has set an example for humanity with his act. At a time when people are dying in droves for want of oxygen across India, including Madhya Pradesh, drivers like Singh are helping to keep the healthcare system running.

According to a Zee News report, Singh did not eat a morsel all the way lest he would feel sleepy or the need to visit the washroom. His assistant Gula Ram too gave him the much-needed company of keeping the spirits high in the long journey.

The tanker was provided VVIP-level security as police vehicles surrounded the tanker to clear the way to ensure safe transport of oxygen. This was also done for the safety of people along the way, Sagar district authorities told Zee News.

The tanker reached Sagar on April 18 bringing much-needed relief to administration as well as patients.

After safe delivery of the tanker at Sagar’s BMC hospital, Singh could be seen drowsy. He said “the doctor in Sagar said it was an emergency situation to save hundreds of lives. Keeping the words of the doctor in mind, I drove with only one visit to deliver oxygen.”

It may be mentioned here that MP has been fighting coronavirus and lack of oxygen, as well as ventilators, has led to the death of people in that state.

In such circumstances, the bravery shown by Singh and his assistant has been applauded by many on social media.