BSF Conducts Flag March In Pipili Ahead Of September 30 Bypoll 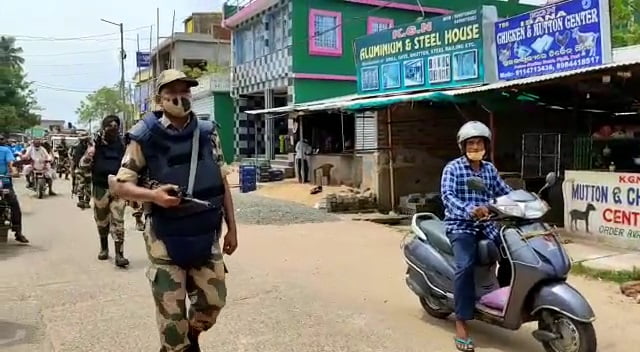 Puri: A posse of BSF personnel reached Pipili ten days ahead of byelections to the constituency scheduled for September 30 and conducted flag marches in the streets to ensure a free and fair elections.

Acting on the directive of the Puri Superintendent of Police Kanwar Vishal Singh, six platoons of BSF personnel and five senior officials began the flag march from Pipili Police Station in the morning and went around the market area under the ambit of the notified area council (NAC).

Singh told mediapersons that as per COVID protocol, BSF personnel who had taken two doses of vaccines have been deployed for poll duty.

Stating that the administration is fully geared up to conduct the bypoll in a free and fair manner, he said any violation of the model code of conduct would be viewed seriously.

The byelections were necessitated by the death of legislator Pradeep Maharathy (BJD) earlier this year. The election to the seat was rescheduled by the Election Commission after the death of a Congress nominee.