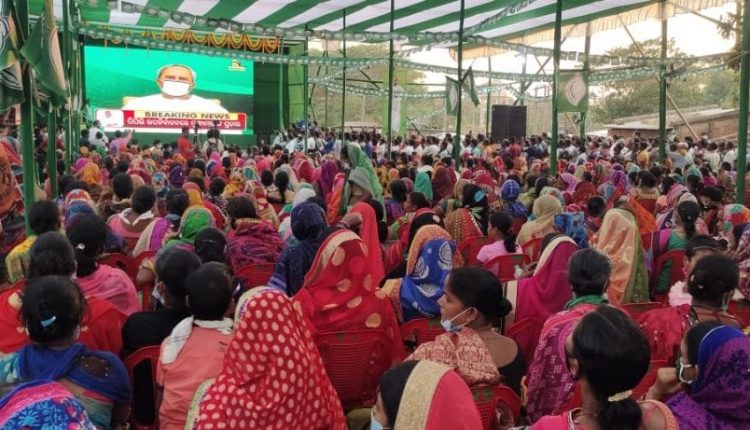 Bhubaneswar: As poll fever grips Pipili assembly constituency, about 25 km from here, the BJD leadership is contemplating whether to use their trump card, Chief Minister Naveen Patnaik, at an opportune moment to ensure the ruling party retains its pocket borough.

Well-placed sources in the ruling dispensation told Odisha Bytes that Naveen is unlikely to visit Pipili to campaign for the party candidate, Rudra Pratap Maharathy, and might instead do it through virtual mode. “The final decision is awaited. It is likely to be taken on Wednesday,” a source confided.

In April, when the by-elections were originally scheduled but had to be countermanded following the death of Congress nominee Ajit Mangaraj a few days before polling, Naveen had canvassed for votes via video conferencing. Thousands of party workers and voters were mobilised at party rallies in different parts of Pipili and the BJD supremo had addressed them virtually from his residence, Naveen Niwas, here.

The reason cited by the party then for Naveen skipping the election trail was the resurgence of the COVID pandemic. However, with improvement in the COVID situation and a good percentage of the population having taken the vaccine, speculation is rife on whether Naveen would go in person for at least a day to boost Rudra’s chances of succeeding his father Pradeep Maharathy, whose death in October 2020 has necessitated the bypoll.

BJP’s Ashrit Patnaik is seen as a tough contender considering his impressive performance in 2019 elections, when he polled 72,000 votes compared to Pradeep Maharathy’s 88,000. And a trip by Naveen to Pipili could give Rudra the necessary push, said party insiders.

“The Chief Minister has mostly stayed indoors since the COVID pandemic hit Odisha in March 2020. The situation is much better now but still, he might not want to set his foot in Pipili as he has been avoiding campaigning in person in byelections,” a senior BJD leader noted. Naveen had skipped campaigning during the Balasore and Tirtol by-elections in November 2020.

With the three-tier panchayat and municipal elections expected to be held in the first half of next year, Naveen and Co. have already started work to galvanise the party apparatus. A comprehensive victory in Pipili would give a fillip to the regional outfit. “Naveen continues to be our number one star campaigner. If he goes to Pipili and seeks votes, a lot of speculation will be laid to rest and the party will set its ball rolling for the upcoming rural and urban polls. But he might stick to his decision to skip bypolls. He might campaign on virtual mode though,” another party leader pointed out. Unlike 2012, Naveen had not campaigned in the 2017 panchayat polls.

Recently, Naveen had stepped out of his residence and inaugurated a few projects, including two bus depots and a restaurant, in the Odisha capital. This had triggered some criticism as to how the CM could go to such events but not attend the Monsoon Session of Assembly, which was held in early September. The CM has not been going to his office at Lok Seva Bhavan since the pandemic started about one and a half years ago. He has limited his public appearances and toured a few places like Kalahandi, Sundargarh, Malkangiri, Puri and Cuttack in the last some months. He is scheduled to visit Balangir on Wednesday on official work.

“The BJD is comfortably placed in Pipili and shall win by a good margin as the CM’s blessings are with Rudra,” senior BJD leader and party’s observer for Pipili Pratap Deb told Odisha Bytes.

BSF Conducts Flag March In Pipili Ahead Of September 30 Bypoll

September To Get Wetter: Fresh Spell Of Heavy Rain In Odisha From This Date!