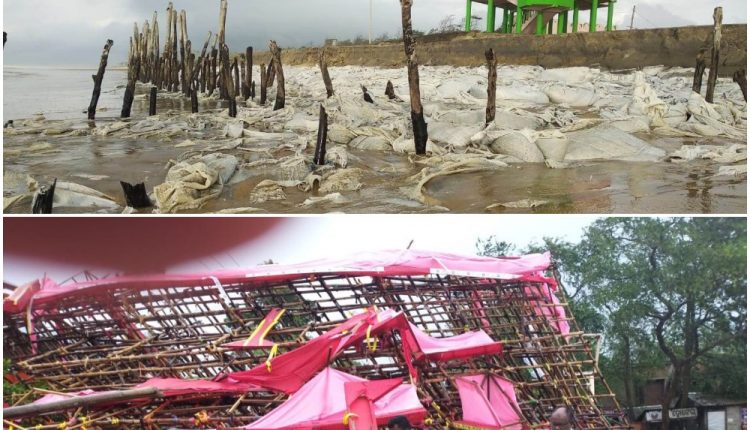 New Delhi/Bhubaneswar: Two people were killed in Odisha and one in West Bengal after ‘very severe’ cyclonic storm Bulbul, which weakened into a ‘severe’ category on Saturday evening, wreaked havoc in the coastal districts of the two neighbouring states, the Centre said on Sunday.

According to media reports, four more deaths were reported from Bangladesh after the centre of Cyclone Bulbul entered that country.

According to the Union Home Ministry, two deaths were reported from Odisha’s Kendrapara district — one by drowning and the other in a wall collapse.

In West Bengal, a man was killed after a tree fell on him at Basirhat in South 24 Parganas district.

Informing about the damage, the Union Home Ministry said four coastal districts of Odisha were severely affected due to the impact of the cyclone. It uprooted several trees and damaged roads as well as communication and power services, it said.

“Power line restoration is going on on a war footing basis in Odisha. More than 70 per cent connections are already restored and the remaining will be restored by today (Sunday) evening,” a ministry statement said.

The ministry added that almost all the roads have been cleared of fallen trees and traffic flow was normal.

There is a report of extensive damage to crops in Odisha, it said, adding that house and crop damage assessment was going on.

A total of 20 Odisha Disaster Rapid Action Force, six National Disaster Response Force and 226 Fire Services teams were engaged in the operation and they were helping in the faster restoration of road and power connections, said the ministry.

Meanwhile, a total of 7,815 houses were damaged and 870 trees uprooted after the landfall of the cyclone in West Bengal, the ministry said. A total of 950 phone towers were also affected in the state.

In coastal Khulna, the worst-hit district in Bangladesh, trees swayed violently and were ripped from the ground in the fierce storms, blocking roads and hampering access to the area. Some low-lying parts of the district were flooded.

Authorities, however, said the cyclone was weakening as it moved inland.