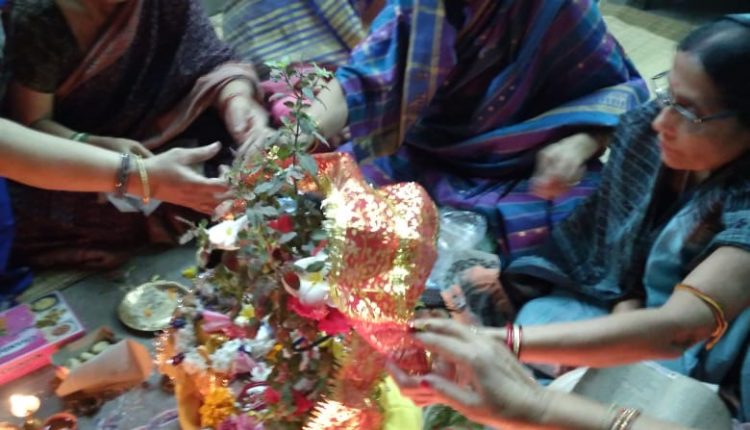 Sambalpur: With the first ray of light, the Jagannath temple in town rings with the sounds of Hula Huli and Sankha. It’s the auspicious occasion of Tulsi Vivaha which is celebrated to mark the divine marriage of Tulsi to Lord Shaligram.

As devotees surge at the shrine for the rituals on the special day, the familiar Sanskrit chants of “Sarba mangala mangalya…” float into the air. But it’s not a male voice, as one would expect. A female priest conducts all the marriage rituals of the divine bride and groom. Besides, all the arrangements for the festival are made by women devotees on the eve of the big day.

Tulsi Vivaha is considered one of the most auspicious days in the Hindu month of Kartik and celebrated on the 12th lunar day of Shukla Paksha (full moon phase). The mythical marriage signifies the end of monsoon and the beginning of the wedding season for Hindus. This year Tulsi Vivaha was celebrated on Saturday.

“It is the marriage ceremony of Vrindabati (Tulsi) and Lord Shaligram. The rituals can be observed in a temple as well as in the house,” informed Pankajini Padee, the female priest conducting the rituals.

And the marriage is an elaborate affair. “Our bride, the Tulsi plant, is beautifully adorned with new sari, sindur (vermillion), haladi (turmeric) and alata. The groom, Lord Shaligram, is brought from the temple’s garbhagruha (sanctum sanctorum) for the marriage. After the marriage rituals, we perform arti and offer prasad to the Lord. We don’t fast on this day because devotees prefer satvik food during Panchuka,” she added.

Purnima Hota, a devotee, happily chips in, “For the marriage, one of us becomes the groom’s mother and another becomes the bride’s mother. We perform Kanyadaan (giving away the bride) also. Every day during the month of Kartik, we make different muruja (Rangoli) in the temple. Today, also we have made muruj for the bride and groom.”

Earlier, Guru Ma Vishnupriya Nanda of Chinmaya Mission used to officiate as the priest for all puja programmes at the Jagannath temple in Sambalpur. Over the years, she trained Pankajini Padee in performing various pujas and rituals.

Tulsi is venerated as a divine devotee of Lord Vishnu. According to Hindu mythology, the Tulsi plant was a woman named “Vrinda”, who was married to demon king, Jalandhar. Pleased with her devotion and piety, Lord Vishnu blessed Tulsi that her husband would be invincible.

Once, Lord Shiva battled with Jalandhar, but was unable to vanquish him due to Lord Vishnu’s blessing. Shiva sought help from Vishnu, who disguised himself as Jalandhar and tricked Vrinda’s in sleeping with him. With Vrinda’s chastity destroyed, Jalandhar lost his power and Lord Shiva was able to defeat him.

When Vrinda came to know about the truth, she cursed Lord Vishnu and turned him into a

To honour her, Lord Vishnu transferred her soul to a plant called Tulsi. Since then, Tulsi has been worshipped with Lord Vishnu everywhere. As per Vishnu’s blessings, Shaligram married Tulsi in her next birth.

A similar festival is held at two shines of Lord Ram in Saurashtra.

As per tradition, one temple is designated as the bride’s house and the other as the groom’s place. The bride’s temple sends an invitation to the groom’s temple. On Prabodhini Ekadashi, a baaraat (bridegroom’s procession) of an image of Lord Lalji (Vishnu) sets off for the bride’s temple. Lalji is placed in a palanquin and accompanied by singing and dancing devotees.

The baaraat is welcomed on the outskirts of Tulsi’s village and the wedding ceremonies are conducted at the temple. Tulsi is planted in an earthen pot for the marriage. People desirous of children perform the ritual of Kanyadaan by acting as Tulsi’s parents.

Bhajans are sung throughout the night. In the morning, the baaraat of Lord Lalji returns to their village with Tulsi.

Cuttack’s Bali Jatra To Be A Starry Affair; Know The Performers