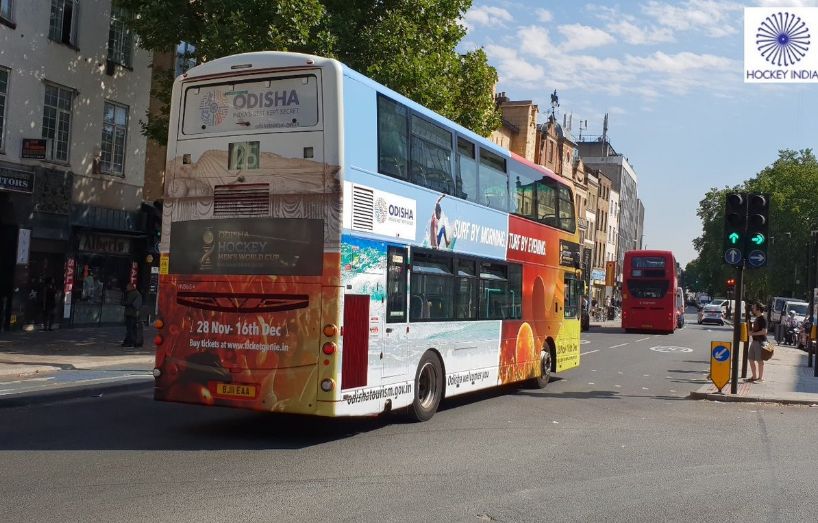 Bhubaneswar: Ahead of the much-awaited Odisha Hockey Men’s World Cup, the Odisha government is going all out with its intriguing bus advertising campaign across Munich, Germany, to promote the event.

The campaign, ‘Odisha by morning, Hockey by evening’, not just promote Odisha as a venue of the sporting event but also as an exciting and beautiful tourist destination.

It coincides with the world’s largest folk festival Munich Oktoberfest in the city. Over the past decade, this festival had been attracting an average of around six million visitors a year, and so the Odisha government was keen on utilizing buses, a mode of transportation very popular in Munich to promote the campaign, government sources said.

Promotion on buses will reinforce the campaign message to an already engaged customer base while captivating the attention of those planning their next escape. This overseas promotion will be visible from October 1 to 31 in Munich, the sources further said.

The campaign has been designed to ensure that not just fans of hockey but also casual tourists flock to Bhubaneswar and Odisha during the months of November and December when this sporting extravaganza is due to take place, the sources added.

Commissioner-cum-Secretary, Odisha Sports & Youth Services and Tourism departments, Vishal Dev said, “Oktoberfest is a huge crowd-puller and bus advertising campaign is a powerful way of being heard. Odisha will get valuable exposure from audiences during the peak morning and evening commutes and it will go a long way in popularizing the state as an exciting sports and tourist destination to the world. The bus advertising activity is a part of a wider marketing campaign undertaken for Odisha Hockey Men’s World Cup Bhubaneswar 2018.”

Odisha is making vibrant strides towards it being hailed as a premium tourist destination. A multitude of beaches, natural forest cover, historic architectural attractions in the form of temples and Buddhist monuments make it an ultimate destination for tourists. The vast hockey-loving public of Munich when turns up in Odisha during the winter months, will not only enjoy a high octane action of hockey’s global showpiece event but also invest time in various activities and experiences that the State has to offer, Dev added.