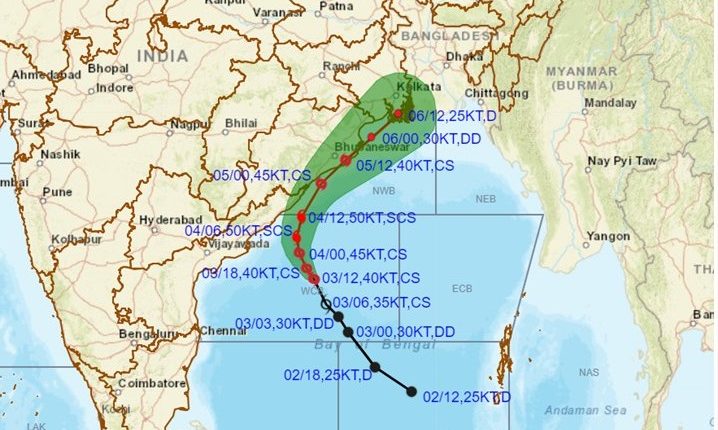 Bhubaneswar: Cabinet Secretary Rajiv Gauba chaired the second meeting of National Crisis Management Committee in New Delhi on Fiday to review the preparedness of states and Central Ministries as well as Agencies to deal with the Cyclonic Storm Jawad.

At the meeting which was attended by the Chief Secretaries and senior officers of Andhra Pradesh, Odisha, West Bengal and Andaman & Nicobar Islands, NCMC was apprised of the preparatory measures taken by the states.

The NCMC was informed that cyclone shelters have been readied and evacuation of people from low lying areas is being carried out. All steps have been taken to stock food grains, drinking water and other essential supplies while fishermen have been asked to return to shores.

Teams for maintenance and restoration of power, roads, water supply and other essential services have also been positioned. Harvesting of standing crops is also being done to minimise damages, the Chief Secretaries informed.

The NDRF has deployed adequate teams, rescue and relief teams of Army and Navy along with ships and aircrafts are ready for deployment as required.

The Cabinet Secretary emphasised that all protocols must be followed, so that there is no scope for loss of lives and damage to property is minimised.

Cabinet Secretary also directed that all fishermen and vessels which are out at sea, must be accounted for by the states concerned for which required assistance would be provided by Coast Guard and other Central agencies in this regard.

He also advised that essential services may be restored in the shortest possible time with minimum disruption, for which advance action should be taken. Public messaging may be carried out to ensure that people in the path of the cyclone are provided with suitable instructions and guidance during the period. The states were also advised to ensure uninterrupted functioning of COVID hospitals, the Cabinet Secretary said.

Secretaries and senior officers from Ministries/Department of Home Affairs, Civil Aviation, Ports, Railways, Shipping & Waterways, Petroleum and Natural Gas, Power and Fisheries along with those from NDRF, IMD, Hq IDS and NDMA also attended the meeting.

India Meteorological Department (IMD) has stated that the cyclone is expected to reach the North Andhra Pradesh and Odisha coast by December 4 morning. Thereafter, it will recurve and move towards the West Bengal coast. The cyclone would bring with it heavy to very heavy rainfall. Wind speeds ranging up to 90-100 kmph accompanied by tidal waves, are expected.