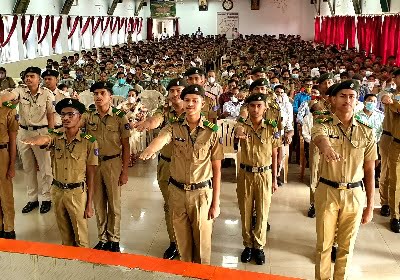 Bhubaneswar: As many as 35 cadets were honoured with various ranks at the investiture ceremony in Sainik School, here on Sunday.

Around 600 witnessed the programme which was organised at the Vivekanand Hall of the school. It was marked by playing of martial tune by School Band and the parade by the senior cadets. It was a momentous occasion for the cadets as it provided them an opportunity to shoulder the responsibility and develop various leadership qualities.

In his address, Principal, Gp Capt Rayan congratulated the rank holders and appealed them to shoulder the assigned responsibilities, with true spirit and perseverance. He exhorted the cadets to dream big and follow the path of truthfulness, honesty, punctuality, dedication and obedience.

The event was coordinated by Bikash Debta who administered the oath to the rank holders.