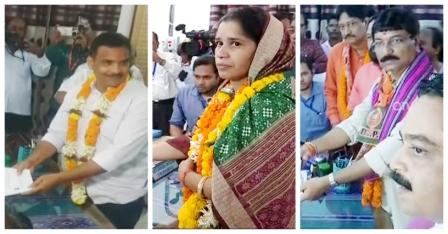 Bargarh: Candidates of BJD, BJP and Congress filed their nomination papers for the by-election to the Bijepur Assembly on Monday.

Led by the senior leaders and a handful of supporters Congress candidate Dilip Kumar Panda arrived at the office of sub-collector Tanmay Kumar Darwan at Padmapur and filed his nomination papers.

“We would apprise people about the autocratic and repressive attitude of the BJD government. The people of Bijepur are strongly behind Congress. This time, Congress will wrest Bijepur,” Panda told mediapersons later.

When asked about senior party colleague Ripunath Seth’s decision to stay away from campaigning after his candidature was not considered by the AICC, Panda tried to downplay the issue.  “Ripunath is like my elder brother. There might be some misunderstanding between him and me. But I am sure that he will campaign for me,” he added.

After Panda, BJD candidate Rita Sahu, accompanied by former Sambalpur MLA Raseswari Panigrahi, Naba Kumar Das and others, came on a procession and filed her nomination.

Talking to the media later, Rita said she will expedite the development process in Bijepur. “The people of Bijepur have reposed confidence in the Chief Minister who has assured them of all-round development of the constituency. I am sure that the BJD will win the election with a landslide majority,” she maintained.

After filing his nomination papers, BJP candidate Sanat Gadatia said the people of Bijepur are aware of the non-fulfilment of the promises announced by Chief Minister Naveen Patnaik. “There is no infrastructure development in Bijepur. There is no supply of drinking water. Most of the government hospitals have no doctors and adequate staff. The BJP will highlight these issues during its campaign,” he pointed out.

In the first bypoll in Bijepur on February 24, 2018, Rita Sahu had defeated her nearest rival and BJP candidate Ashok Panigrahi by 41,933 votes while the Congress candidate Pranaya Sahu finished third with a dismal show.

However,  Naveen consted the 2019 Assembly elections in May from both Bijepur and Hinjili. Though the Chief Minister won by a massive margin, he later vacated the seat and decided to retain his home constituency Hinjili.