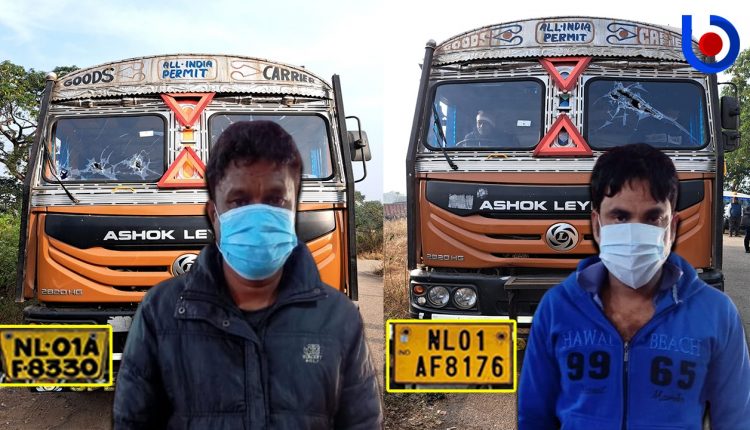 Keonjhar:  Cattle smugglers opened fire at a team of Special Task Force (STF) of Odisha Crime Branch after being intercepted while smuggling the animals in containers in Keonjhar on Wednesday.

According to reports, no one was hurt in the incident and the STF team overpowered two persons and seized two trucks in which cattle were being transported to West Bengal in a cruel manner.

Acting on a reliable information about illegal transportation of cattle in a cruel manner, a team of STF and Keonjhar Police conducted raid at Juriaghati under the jurisdiction of Keonjhar Town Police Station.

Following the operation, two accused persons, identified as Sk Rasid of  Haldia and Sk Rejabul of Howrah in West Bengal were apprehended, the STF said in a press note.

During search, 74 cattle, two trucks with registration of Nagaland and other incriminating materials were recovered from their possession. The accused could not produce any authority in support of transportation of the cattle, for which they have been detained and handed over to Keonjhar Town PS for necessary legal action.

The seized cattle were shifted to nearest cattle shed (GOSALA) at Badabil for their care and safety. A case has been registered under different sections of IPC and Prevention of Cruelty to Animal Act, 1960.  Further investigation is on, it added.

Odisha Bypoll: Votes To Be Counted For 23 Rounds Amid Tight Security In Padampur Tomorrow