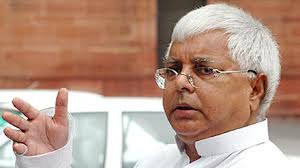 New Delhi: Lalu Yadav must not be allowed any reprieve to pursue his political activities, the CBI told the Supreme Court on Tuesday, reports NDTV. The agency opposed bail to Lalu in fodder scam cases for which he is serving a jail term in Jharkhand.

Lalu had requested bail for the Lok Sabha elections and was “misleading the court by asking for bail on medical grounds,” the agency said. It added that the former Bihar chief minister “is conducting political activities from a special ward of a hospital.”

“Lalu Yadav is not sentenced to 3.5 years but 27.5 years in jail if all punishments are calculated cumulatively,” the CBI said in its affidavit. It said the leader hasn’t served his jail term but has been staying in a special ward of a hospital.
The Supreme Court will hear the case on Wednesday.