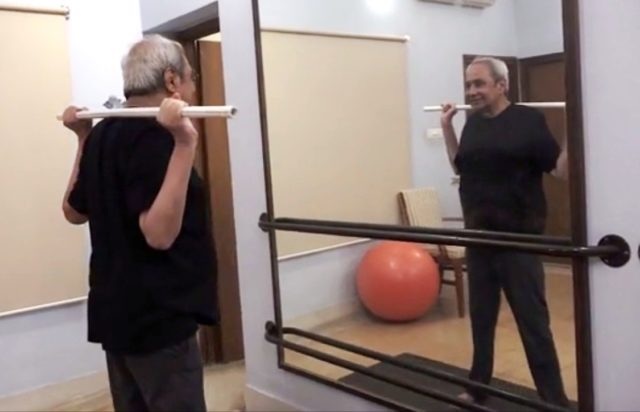 Bhubaneswar: Chief Minister Naveen Patnaik on Monday told NDTV that “one of our ex-MPs” was spreading rumours about his health, a claim Baijayant Panda dismissed as “ridiculous”.

The ruling BJD had last week released a video showing a fit Naveen spending quality time at his gym. The aim was to silence those who had raised doubts about his health.

On Monday, the Chief Minister made it clear that the person responsible for spreading the rumours was none other than his one-time-friend-turned beta noire. “One of our ex-MPs spread the rumours for political gains,” he told NDTV. Asked if by ex-MP, he was referring to Baijayant Panda, who is now the BJP vice-president, Naveen said: “I am”.

Asked why Baijayant had spread such rumours, Naveen replied: “I think for his personal political ambition.”

Moments after the interview was aired, Baijayant dismissed Naveen’s claim. “That’s just a ridiculous thing to say. Also its false. Its very sad to see him descend into this paranoia about me”, he Tweeted. “I pray Lord Jagannath to give him the good sense to reject such nonsensical conspiracy theories, and also bless him with continued good health.”

It’s very sad to see him descend into this paranoia about me.

I pray to Lord Jagannath to give him the good sense to reject such nonsensical conspiracy theories, and also bless him with continued good health 🙏🙏🙏 https://t.co/fzkzApwHu1

The equation between Naveen and Baijayant has hit an all-time low in the recent past.

Last month, while announcing the party’s nominee for the Kendrapara Lok Sabha seat, Naveen, in a marked departure from his practice of not taking any pot shots at his political rivals, said Anubhav Mohanty will work “only” for the interests of the people and have “nothing to hide in his affidavit” like the earlier one “working for a mining company”.

Baijayant had shot back saying: “Didn’t think Naveen would stoop so low.”

Baijayant will be taking on Anubhav from the Kendrapara Parliamentary Constituency in what is being described as a clash of titans. Both the BJD and the BJP are expected to put all their might at stake to defeat the rival candidate.

Baijayant became Naveen’s bete noire after the 2014 polls, following a perceived ideological shift when he generously heaped praises on several policy decisions of the Narendra Modi government as a columnist, which did not go down well with the ruling dispensation in Odisha.

He resigned from the BJD in May 2018 and from the Lok Sabha a month later.

However, his entry into the BJP was delayed for unknown reasons, as the party leadership kept him hanging for almost eight months. Baijayant finally embraced the saffron party on March 4 and was appointed its national vice-president and spokesperson four days later.