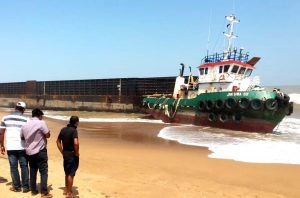 Puri: The Chilika Development Authority (CDA) on Saturday ruled out apprehension over oil leakage from the Malaysian cargo ship ‘Jin Hwa 32’ stranded at Rajhans, near Chilika.

Talking to the media, CDA’s Chief Executive Officer (CEO) Sushant Nanda, said the Puri Collector has kept a close watch on the present position of the cargo ship. Besides, CDA has stepped up its standard operating procedure (SOP). Going by the condition of the ship as of now, there is no possibility of oil leakage.

Stating that oil leakage will pose a threat to the eco-sensitive coastal zone of Chilika Lake and Odisha coast, the Indian Coast Guard authorities on Wednesday had asked the ship owner and the company to take necessary steps to ensure that there is no oil leakage from the ship, failing which appropriate action will be taken.

The ill-fated ship with seven Malaysians, two Filipinos and one Indian on board, was on the way to Vishakhapatnam port to pick up new cargo after unloading its shipment in Bangladesh when it got caught in a storm in the Bay of Bengal and drifted towards Odisha on the night on August 7.