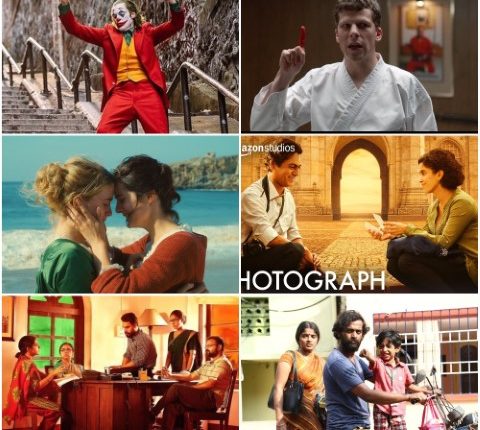 This year, a common theme among a lot of films that made it to the year-end lists is the use of long takes with almost no dialogues and using mood and tone to define the scene. Anyway, three Chinese films did that and they are all pretty great. 2019 also saw Malayalam film industry leading the way, a popcorn-worthy epic fight between Martin Scorcese and Marvel films, which Scorcese won (I think) in reel life, a disaster movie about alligators that turned unexpectedly gripping, Brad Pitt proved that he is not just a handsome face, unconventional love stories (looking at you Assam) and Koreans reminding us why they make the best goddamn thriller movies in the world.

An acclaimed but subdued film director with every possible physical and mental ailment tries to cope with lifelong pain by reconnecting with his past and through his art. Antonio Banderas in a career defining role.

A decent follow up to Lunchbox as Ritesh Batra again deals with an Indian love story that won’t quite land due to social mores and circumstances. Nawazuddin Siddiqui is an extremely versatile actor. The ending makes the whole movie.

The most satisfying aspect of Virus is that it tries to avoid as much melodrama as possible even though it is about a recent real tragedy. The scientific, detective type approach to solving the crisis is refreshing to watch and makes you respect Government bureaucracy, which usually takes a beating.

Birds of Passage could serve as a prequel to Narcos albeit with the Wayuu language; a Shakespearean tragedy in the northernmost part of South America. Columbia’s modern history is heavily linked with its narco business and the film is a very raw take on the clash of civilisations, i.e., between preserving ancient cultures and modern greed.

Probably a female version of Call Me by Your Name. The couple’s fate is doomed from the start and we were all expecting it but the way it is portrayed is the real gut punch. The movie breathes easily and there is no real tension but mostly because the protagonists are resigned to their fate. A very palliative-care type feel to the story and that was beautiful.

The only reason Glass makes it to the top 20 is because it ties really well with its prequels. I guess this is one of those that will only satisfy the hardcore fans. M.Night Shyamalan has made the most realistic superhero trilogy.

In an era of #MeToo, The Art Of Self-Defense serves as a fine parody about toxic masculinity. This is also Jesse Eisenberg’s best role since The Social Network. The underground nature of the karate club is reminiscent of Fight Club. The transitions between dark and funny are smoothly handled.

The tone and tenor of the film is grounded and we are really watching the mental breakdown of one clown rather than some grandiose good-vs.-evil battle. My advice is to not see this film as a hot political take on violence but as a fresh take on a popular comic-book brand. Joaquin Phoenix is superb.

This film felt home because who amongst us has not faced the depressing reality of house hunting in India? The neo realist portrayal with a cast of non-actors or debutants gave the feeling of a documentary. It has deservingly won a National Award.

Where to begin? A drug-fuelled bizarre cacophony of mind-bending visuals and events unfolds when a troupe of dancers in the 90s France gets the baddest of all bad trips. The plot is thin but it doesn’t matter. The dialogues don’t matter and since it is a cast of all professional dancers, they act through their dancing and other body movements. The 42 minute single take is one of the most visceral and hellish pieces of scenes one will watch in 2019.

This is the first of a two-part series that will be published today and on December 31.