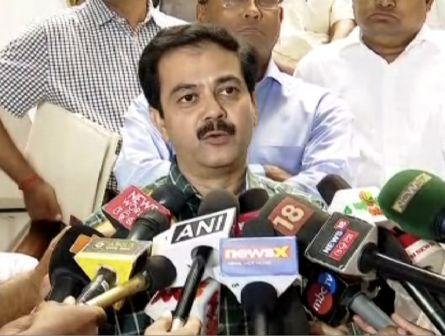 Bhubaneswar: The inter-ministerial team on Wednesday praised the Odisha government for its prompt relief and restoration work in the coastal districts, which were ravaged by the extremely severe cyclonic storm Fani on May 3.

“The state government has done a commendable job after the cyclone and provided relief, food, polythene and financial assistance to the affected families,” additional secretary in the Ministry of Home Affairs, Vivek Bharadwaj, who led the team to Odisha, told mediapersons after a high-level meeting with the senior government officials at the State Secretariat here.

He said that Puri district suffered colossal damage due to the severe cyclonic storm. Besides, several houses, thousands of coconut trees and hundreds of betel vines have been destroyed in Khurda and Cuttack districts.

Bharadwaj also informed that the Centre will make provisions for restoration of power network and extend livelihood support under the rural job scheme (MGNREGA).

Though Bharadwaj parried question on the date that the inter-ministerial team will submit its report to the Centre, he assured full cooperation to the state government in the post-cyclone relief and restoration works.

The team left for New Delhi in the afternoon.

Stating that the inter-ministerial team assessed damage in the three cyclone-hit districts during its two-and-half day tour, chief secretary Aditya Prasad Padhi said that the state government will submit a full-fledged damage report to the Centre in subsequent phases.

“The state government has received the cyclone damage report from some districts. A full-fledged report will be prepared once we receive reports from the remaining affected districts and submitted to the Centre,” he added.

Padhi further said that the state government has requested the team to relax the State Disaster Response Fund (SDRF) and National Disaster Response Fund (NDRF) norms to facilitate immediate relief. “We have specifically requested the team to relax the SDRF norms for financial assistance to the state’s power sector which has suffered huge damage,” he pointed out.

Special Relief Commissioner (SRC) Bishnupada Sethy, who was also present at the meeting, told the media that the preliminary report from the affected districts puts the damaged at an estimated Rs 11,942 crore. “As decided, the state government will conduct house-to-house survey in the cyclone-hit districts from today to ascertain the exact damage.  After going through the survey report, we will furnish a detailed and final report to the Centre,” he added.

The SRC also praised the collectors for their commendable job in the post-cyclone relief and restoration works.