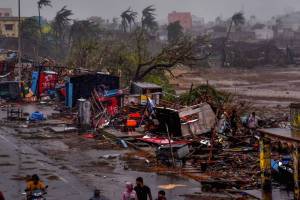 Bhubaneswar: A Central team to assess the post-Cyclone Amphan damage in Odisha has praised the state government for its preparedness, response and disaster management skills.

“The pre-positioning of manpower and machines in vulnerable pockets, timely evacuation of people from low lying areas and kutcha houses, preventive preparedness and community involvement are the achievements of the Odisha government,” said the Joint Secretary of Union Home Ministry, Shri Prakash, who led the seven-member team.

“We have seen in remote areas that even electricity could be restored within 24 to 72 hours,” he added.

Prakash said this during a meeting with Chief Secretary Asit Tripathy and other senior officials at Lok Seva Bhawan here on Friday.

On his part, Tripathy stated that cyclones are going to be a regular feature in summer, monsoon and post-monsoon months due to the geo-climatic location of Odisha. He, therefore, requested the Centre to support Odisha in building cyclone-resilient infrastructure rather than that spending huge amounts of money every year towards immediate restoration and rehabilitation.

In reply, Prakash said that the Central team which visited the cyclone-hit districts of Balasore, Bhadrak, Jagatsinghpur and Kendrapara, will soon submit a report to the Centre with the state government’s suggestions.