Releasing a list of the funds released on various heads, Pradhan said around 3.17 crore beneficiaries in the state have received 5 kg rice each from the Central assistance of Rs 2255 crore. 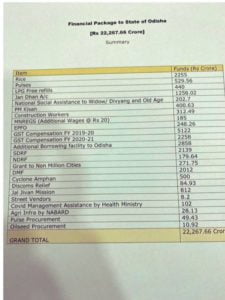 Similarly, Rs 529.56 crore towards distribution of pulses and Rs 440 crore for LPG free refills were sanctioned by the Centre, the Union minister said. While Rs 1258.02 crore was released to Jan Dhan accounts, Rs 812 crore released for Jal Jivan Mission, he added.

25 Trains From & Via Odisha To Run On Revised Timings From Tomorrow; Details…

Winter To Be Colder In Odisha This Year; Know Why

Winter To Be Colder In Odisha This Year; Know Why