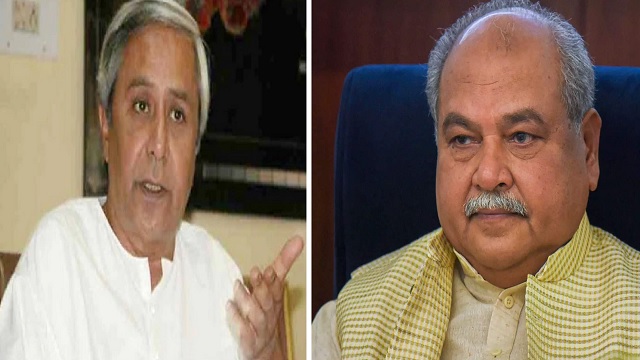 Bhubaneswar: Amid the political slugfest between the BJD and BJP over farmer issues ahead of the December 5 by-election to the Padampur Assembly constituency in Odisha’s Bargarh district, Union Minister of Agriculture and Farmers Welfare Narendra Singh Tomar has countered the claims of the ruling party that the Centre had been holding up Pradhan Mantri Fasal Bima Yojana (PMFBY) instalments of the farmers.

In a letter to Chief Minister Naveen Patnaik, Tomar on Wednesday said that the Centre had promptly acted in this regard after the matter was first brought up a few months back. He said that the responsibility of floating the bids for the implementation of PMFBY, allocating the cluster of districts to the Insurance Companies (ICs) and agreement on premium rates lies has been vested with the state government as per the norms of the Revamped Operational Guidelines (ROGs).

“A well-defined procedure was also put in place to resolve yield data disputes wherein a state-level TAC was provisioned so that the dispute is first settled at the state level. The case would be brought before the central TAC only in case of non-resolution at the first level,” the letter said.

Tomar further said that the issue of disputed claims of Kharif-2021 in some insurance units in Odisha was first brought to the Centre’s notice in July this year. “The GoI in response had advised the state government to follow the due procedure and was informed that cases of some insurance units were resolved at the STAC level but the remaining 189 cases remained unresolved and were filed for higher appeal before the central-level TAC.”

He said that the Centre promptly responded to it and advised the state authorities to get them examined by STAC, which Odisha had not constituted despite it being part of the guidelines since 2020. “Also the GoI put up the matter before the TAC as soon as the appeals against STAC order were received and the matter was taken to its logical conclusion,” Tomar wrote.

He also informed that the majority of claims in disputed districts have been settled at the TAC after due follow-up and complete settlement is expected by this week. “Out of nine disputed districts, Rs 723 crores is the total payable claim out of which Rs 622 crores has been settled,” he added.

This came close on the heels of Union Education Minister Dharmendra Pradhan’s request for an investigation into the “scam” pulled off in the implementation of Pradhan Mantri Fasal Bima Yojana (PMFBY), and review of the sum paid by the insurance company enlisted by the Odisha government under the central scheme.

The BJD, on the other hand, accused BJP of doing politics over the scheme and claimed that the farmers’ insurance money was released only after pressure from the farmers and continuous follow-up by Chief Minister Naveen Patnaik. “After pressure from farmers and continuous follow-up by Odisha CM, now the Centre released the Fasal Bima,” BJD MP Sasmit Patra said on Wednesday.

Amid high-decibel politics, the CM on Tuesday announced input assistance for drought-hit areas of Odisha. He said about Rs 200 crore will be spent from the state exchequer to support the distressed farmers.

Notably, various farmer organisations have been staging dharnas at Padampur as their insurance claims under PMFBY for last year’s crop loss due to drought are yet to be settled.