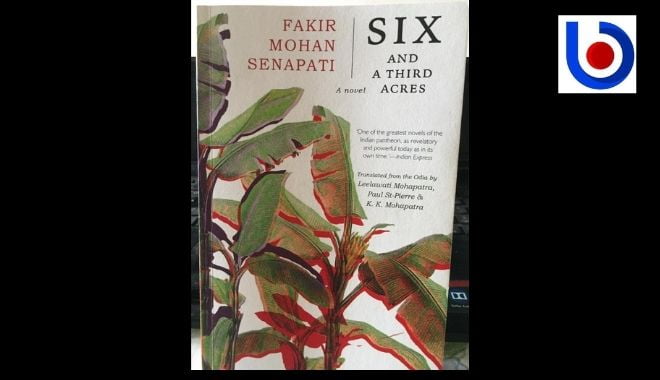 Unlike the iconic early novels in some Indian languages, Fakir Mohan Senapati’s Chha Mana Atha Guntha (1897-99), considered the first modern novel in Odia, was not translated into English immediately. The Malayali novel Indulekha by O. Chandu Menon was published in 1889 and translated into English within a year or so. So was the case with the Telugu Rajasekhar Charita (1880) by K. Viresalingam. Rabindra Nath Tagore’s Ghare Baire was published in 1916 and an English translation came out in 1919.

Chha Mana Atha Guntha had to wait for more than sixty years before being translated into English. It seemed like a thunderous start, though. Two English translations of the novel were published in 1967: The Stubble under the Cloven Hoof by C.V.N. Das and Six Acres and a Half by A.M. and B.M. Senapati.  A third English translation called A Plot of Land by Nuri Mishra, presenting a simplified and retold version of the novel, was published two years later, in 1969. Truth be told, all these were local affairs, neither published in respectable forums nor well projected.

It was troubling to think that the iconic Odia novel’s translational odyssey would end here, in the 1970s, with the end result that the visibility enjoyed, say, by Premchand’s Godaan—the classic translation of this novel by Gordon C. Roadermel was done in 1968—would be denied Chha Mana Atha Guntha.

This state of affairs was to change, but not soon. Fakir Mohan’s masterpiece had to wait for another three decades, or, to be precise, until the early years of the 21st century before being reborn in a matching English translation that captured the nuances and complexity of the original novel. This translation, which went by the name of Six Acres and a Third, was the joint work of four translators, three Odias and one Canadian. It was published by the University of California Press in 2005, with a Penguin reprint coming out in 2006. In an article in Huffington Post (3 January 2020) Priyanka Lindgren included this among the eight modern Odia works in translation that she considered a must-read.

The translational journey of Chha Mana Atha Guntha is of course far from over. In February of this year a brand new English translation of Fakir Mohan’s master work has been issued from the acclaimed publishing house, Aleph Book Company. Entitled Six and a Third Acres, this is also a multi-authored work. Its panel of three translators includes, of course, the same Canadian who was involved with the earlier translation.

The work is presented differently from its immediate predecessor with the translated text at the beginning and the prefatory material tucked at the end in the form of Afterword and Acknowledgements.  This is done to highlight the translation itself which, the translators point out, the editor found ‘unputdownable’ when she read it in manuscript form.

It will be hard for the reader who reads this new translation to conclude otherwise.

To this reader the distinctiveness of the new translation lies in its desire to creatively engage with a supremely playful, parodic and polyphonic novel. Some examples will suffice. The playful and parodic are both evident when the deceitful main character Ramachandra Mangaraj’s habit of rising early is first rendered colloquially as ‘up at first light’ (Ch. 2, p. 11). This is then contrasted with the dictum from the shastras, ‘brahmamhurta moment of awakening’ (ch. 2, p. 11), given parenthetically. Mangaraj is thus thoroughly deconstructed. He rises early to do something that the shastras prohibit: namely to plot the destruction of his many victims, Bhagia and Saria being preeminent among them.

Playfulness of the original novel is a function of the racy and colloquial speech and speech rhythms used therein. The translation tries to find punchy idiomatic English equivalents for these Odia colloquialisms. In most cases it succeeds in doing so. While in some instances these exist readily and have been picked thoughtfully—such as ‘squeaky clean’ (ch. 1, p. 1) for empty pots—in some other instances these are ingenious inventions through literal translation, as in the case of ‘half-moon jab’ (ch. 7, p. 30) for that humiliating form of physical assault called ‘tantia’, the infamous ‘ardhachandra’ shove. In another place finding no trace of someone has been rendered as ‘seen hide nor hair’ (ch. 8, p. 36) of him. In yet another place the narrator’s formula for making things crystal clear so the reader can follow the story has been given as ‘it will open up perspectives in front of you like a broad boulevard’ (ch. 10, p. 57).

This is a translation that is sensitive to the twists and turns of Chha Mana Atha Guntha, especially its rambunctious narration. And it is attractively packaged with a beautiful cover, giving us a whiff of an Odia, nay, an Indian village. It succeeds in its chosen task of making Fakir Mohan Senapati’s novel desirable and endearing for the twenty-first century readers.