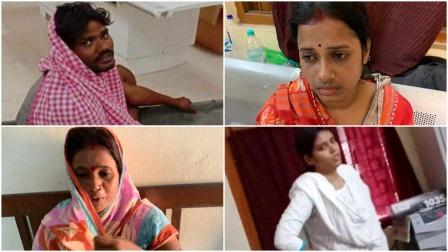 Cuttack: The encounter and arrest of the two wanted criminals by the Choudwar police in 24 hours took a new turn as the Commissionerate Police on Monday arrested three family members, including the girlfriend of one of the criminals.

Talking to the media, Cuttack DCP Akhileswar Singh said that Muna Dehury, who was arrested this morning, revealed during interrogation that Ajaya Sahoo alias Jitu was also involved in the loot and murder of Lala Lalit Singh, near Nuapatna rice mill under Gurudighatia police limits on September 24.

Jitu was arrested by the Choudwar police on Sunday.

“Acting on his statement, police interrogated Jitu today. During interrogation, he admitted that his girlfriend Sunita Singh alias Jina, sister Laxmipriya Mahala alias Anu and his mother Kanchan Sahoo alias Malati used to sell his loot items to the people. From this, it is now clear that they belong to one gang,” the DCP said.

Police have arrested Ajaya’s girlfriend, his sister and mother and will interrogate them to ascertain their modus operandi, he added.

Holy Month Of Kartika Begins Today, Know The Facilities For Habisyalis In Puri