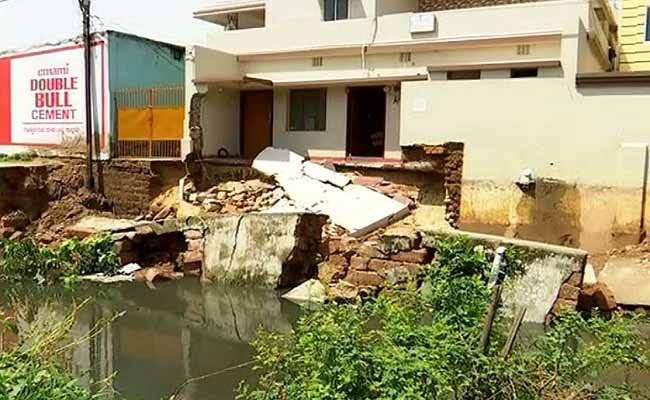 Cuttack: The Cuttack Municipal Corporation (CMC) on Saturday announced compensation to the people of Professor Pada. Their houses had collapsed during the desilting work of the main drain connecting Bajrakabati and Chhatra Bazar by Japan International Cooperation Agency (JICA) workers late on Friday night.

CMC commissioner Ananya Das said that the each of the affected owners will be given compensation by JICA.

She also said that henceforth, CMC officials will personnel supervise JICA project work in the city.

According to reports, JICA authorities had engaged the workers in the desilting of the main drain in the night. While the work was going on, some portions of the houses and a godown near the drain collapsed.

Talking to the media, irate locals of Professor Pada blamed JICA and the Cuttack Municipal Corporation (CMC) for the incident.

“Neither JICA nor CMC officials are overseeing the JICA project work in Cuttack, which began in 2013. Due to this, there have been numerous mishaps in the city. Last year, the Housing and Urban Development Minister Pratap Jena had said that the JICA project in Cuttack will be completed by December 2020. But going by the pace of the work, we doubt, whether the project will be completed this year,” they added.

Know The Guidelines For Ramzan In Cuttack’s Mosques