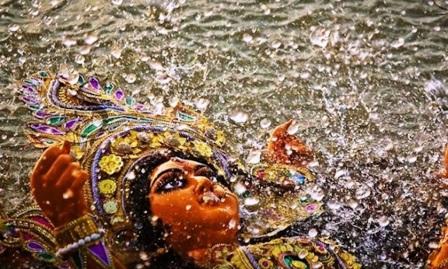 Cuttack: The Cuttack Municipal Corporation (CMC) has initiated steps for refurbish and beautify Devigada where most of Durga idols are immersed.

Following the demand of Peace Committee of Cuttack for development of Devigada on Kathjodi river, a team of CMC officials led by mayor visited the site on Monday. After taking stock of the condition there, the municipality has decided to take a number of measures to facilitate immersion of idols.

The CMC would take up the work of cleaning and beautifying the road to Devigada on a war-footing. It has already started digging artificial ponds at 4 places in the area for immersion of the idols. While two ponds will be exclusively used for immersion of Ganesh idols, the other two would be meant for Durga idols, CMC sources said.

The CMC targets to complete the work before the day of immersion of Ganesh idols from community puja pandals across the city. The immersion procession of Ganesh idols has been allowed to be carried out on September 4, 11 and 18. All the puja committees have been directed to immerse their idols in artificial ponds at Devigada.

Similarly, after the celebration of Dussehra in the Silver City, the ‘Bhasani’ (immersion procession) of Devi idols has been scheduled to be taken out on October 6.