Come To This Odisha Village To Relish Litchi 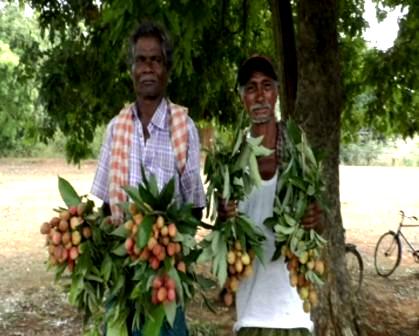 Sambalpur: Relishing litchi during summer is always a delight. This red, walnut-sized, pebbly fruit is native to China and was introduced in India towards the end of the 17th Century. It grows abundantly in Bihar and Jharkhand. But few people know that this mouth-watering fruit also grows abundantly in a village in Western Odisha.

Come to Badabahal village in Kuchinda block of Sambalpur district and you will find litchis hanging in bunches in a vast stretch. Residents of this village eke out a living on this exquisite fruit.

Situated on the foothills of Gudguda, one of the most famous tourist destinations in the state, the people of Badabahal village cultivate litchi using spring water that flows down the hill forest. While some village residents have grown litchi on their private land, some others have grown the fruit-bearing tree on the leased land.

The villagers export this tiny fruit from neighbouring states as well as other areas of the state, like Sambalpur, Rourkela, Cuttack, Bhubaneswar, Jharsuguda and Sundargarh.

Some residents of the village said that unlike litchi, which is imported from the other states to Odisha with artificial colours, the litchi exported by them is natural and has no artificial colours in it to attract unsuspecting customers. “This is the reason why people prefer our litchi the most,” they said.

Several people from Odisha and the neighbouring states used to visit the vast litchi farms in the village during summer.

Naveen Is Fit To Be PM: Surya Patro