Mumbai: Popular comedian and actor Kapil Sharma and his wife Ginni Chatrath are reportedly all set to welcome their second baby in January 2021. They had a daughter Anayra in 2019. The couple has not made any official announcement but reports suggest that Ginni is in her last trimester and will give birth to their second child in January. According to reports, Kapil’s mother has flown to Mumbai to help her daughter-in-law during the last phase of the pregnancy.

Ginni’s baby bump was visible on the Instagram posts of laughter queen Bharti Singh during Karwachauth celebrations. Also, during the Diwali pictures, Ginni can be seen hiding her baby bump behind a chair in their family photo featuring Kapil, his mother and their daughter Anayra. 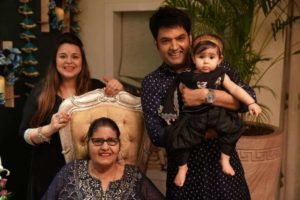 Also Read: Why Is Comedian Kapil Sharma Getting So Many Compliments These Days?

Every Indian Will Get Vaccinated Against COVID By 2024: SII CEO Adar Poonawala