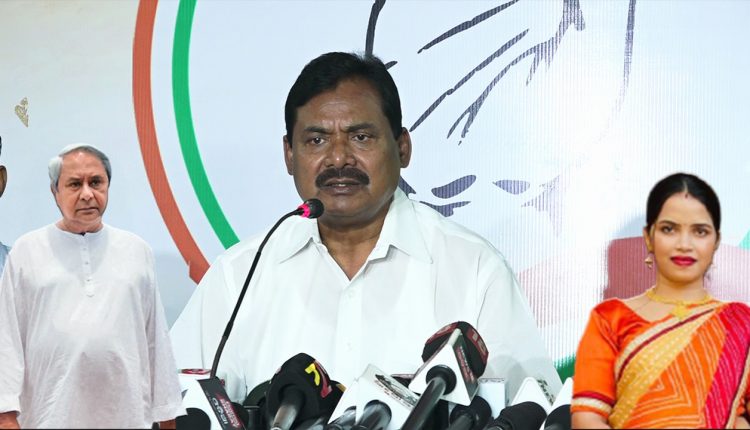 Bhubaneswar: Hitting out at Odisha Chief Minister Naveen Patnaik over Archana Nag’s honeytrap racket, Congress on Sunday demanded a statement by him on the issue, saying his silence has deepened the mystery in the case in which many senior leaders are allegedly involved.

Addressing a press meet in Bhubaneswar, Odisha Pradesh Congress Committee (OPCC) President Sarat Pattanayak also demanded probe by a special Investigation Team (SIT) into the whole episode as police is yet to act despite involvement of several senior politicians in the case.

The whole scandal involving the lady blackmailer should be thoroughly investigated by a SIT headed by a sitting judge of the High Court in order to unravel the truth surrounding the sensational case, he said.

Mounting a scathing attack on the Chief Minister over the issue, Pattanayak claimed that the image of Odisha has been tarnished outside the state for which the BJD government and the ruling party are responsible.

Stating that the Archana scandal marked a dark chapter for the state, the senior Congress leader claimed that the police are unable to take any action in the case despite having all information and evidence due to pressure from some quarters.

Noting that the state police have dome many commendable jobs in the past, he sought to know as to why there is alleged inaction in the lady blackmailer case. “Tardy probe in this scandal has become a topic of discussion everywhere, even outside the state. The scandal has defamed Odisha,” he said.

Seeking a statement from the Chief Minister on the issue, the PCC chief said Naveen’s silence is deepening the mystery and suspicion and he must break his silence in order to put an end to the ‘dark chapter’ that the state is passing through in the wake of Archana’s honeytrap racket.

All information pertaining to the case should also be made public as people want to know as to who all are involved in the scandal, Pattanayak said, adding it is a question of dignity of women and Odisha’s image.

Accusing the ruling BJD of adopting double standard, he alleged that crimes against women witnessed a spurt across the state though the ruling party claims to be espousing the cause of women empwermwnt.

Dismissing the OPCC president’s claims, BJD spokesperson Lenin Mohanty said the national parties neither have any issue nor any stance to highlight success at the time of by-election. “Truth will come out in Archana Nag case at the right time,” he said.

Visa Racket: Youths Of Odisha’s Kendrapada Duped Of Rs 25 Lakh With Lure Of Jobs In Kuwait