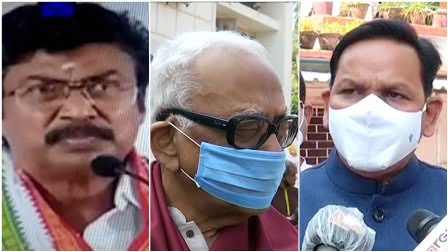 Bhubaneswar: The Congress and BJP on Sunday engaged in a war of words over the death of Pari, a minor girl of Jadupur village in Odisha’s Nayagarh district.

Briefing mediapersons, AICC leader and Odisha in-charge A Chella Kumar said the state government had ordered a court-monitored SIT probe into the case after the Congress raked up the issue in the State Assembly.

A day after visiting Jadupur village to meet parents of a minor girl, who died under mysterious circumstances in July this year, the Congress leader termed the announcement of Odisha Government as a historic success for the Congress. Kumar said BJP is trying to divert the issue alleging that Congress leaders have remained silent as they are bribed by the BJD.

Referring to the CBI probe demand by the BJP on Pari murder case, Kumar questioned the outcome of CBI probe into Itishree Pradhan death and mining scam? “The demand of BJP for a CBI probe into Pari murder case bears ample testimony to the close nexus between the saffron party and BJD as they are the two sides of a coin,” he pointed out.

Reacting to the bribery charge by BJP national spokesperson Sambit Patra, leader of the Congress Legislature Party (CLP) Narasingha Mishra demanded a written unconditional apology by the former, failing which his party will serve a notice to him to Orissa High Court. “If the BJP has the guts, let it demand the resignation of the Chief Minister,” he added.

Refuting the allegation of the Congress leaders, BJP leader and leader of the Opposition Pradipta Naik said the people of Odisha are aware of the outcome of two by-polls in Odisha and the deal between the Congress and the BJD. “The Odisha Congress in-charge ought to know that BJP had contested against the BJD in the recent bypolls,” he maintained.

“BJP demands the ouster of the Agriculture minister Arun Sahoo and a CBI probe and the government will fall apart like a house of cards with the resignation of the Chief Minister,” he noted.