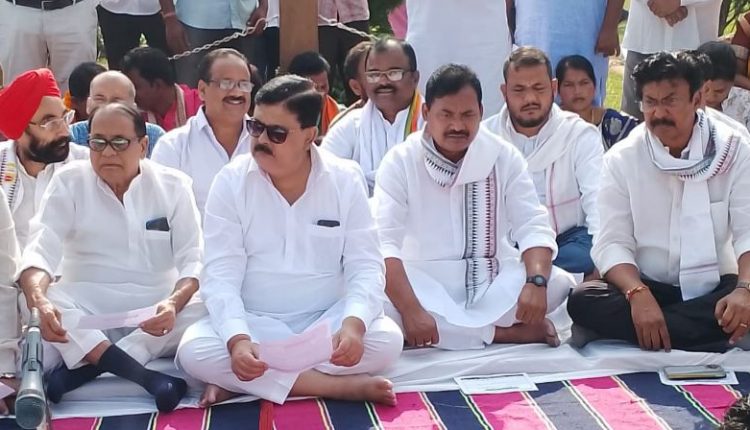 Bhubaneswar: The Congress launched its ‘Bharat Jodo Yatra’ in Odisha on Monday with an aim to highlight alleged failure of the BJP government at the Centre and BJD rule led by Chief Minister Naveen Patnaik in the state in all spheres.

The 100-day yatra kicked off from the Indira Gandhi Park in Bhubaneswar in the presence of Odisha Pradesh Congress Committee (OPCC) president Sarat Pattanayak, party’s state in-charge A Chella Kumar and a host of senior leaders.

The participants, who set out their journey after paying floral tributes at the statue of Indira Gandhi on the occasion of her death anniversary, will cover a distance of 12 km on the first day and make a halt at Phulnakhara before resuming the march.

Apart from MPs, MLAs, leaders and workers of different party wings, unemployed youths, students, farmers and labourers are also participating  in the yatra. During the ‘Bharat Jodo Yatra’, the Congress leaders will visit 25 districts in the state covering 2250 km in 100 days.

The Odisha leg of the Yatra has been undertaken as part of the party’s national campaign launched by Rahul Gandhi, according to PCC chief Sarat Pattanayak.

The party seeks to draw the attention of the people to various problems ailing the country since the BJP under the leadership of Prime Minister Narendra Modi came to power at the Centre and mobilise public opinion, he said.

They will raise the issues of price rise, growing unemployment, inflation, law and order and intolerance prevailing in the country during the last 8-year rule of BJP.

The Congress will also campaign against the misrule of BJD under the leadership of  Naveen in the state for the last 22 years, he said. Rampant corruption, unemployment, poverty and misuse of official machinery by the ruling party will be put under focus by the Congress leaders during the padyatra.

Temporary tent houses have been set up, where leaders will take rest and have food. During the yatra, Congress leaders will hold discussions with women, sports personalities, senior citizens and farmers on various issues, said senior Congress MLA Santosh Singh Saluja.