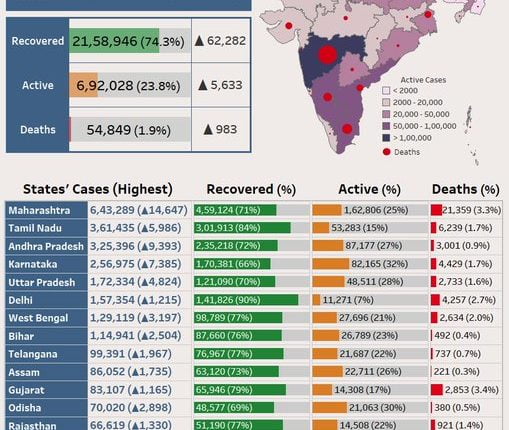 New Delhi: India has registered over 12 lakh COVID-19 cases in August, the highest count by any country for this month.

There is a relative stagnation in the number of new positive cases being detected every day which has been locked in the mid-60,000s for almost two weeks, much longer than it has remained in any other range.

On Friday, the country’s COVID-19 tally zoomed past 29 lakh to stand at 29,05,823 with an overnight addition of 68,898 positive cases, the Union Health Ministry informed. This occurred only a day after the tally crossed 28 lakh on Thursday.

Besides, 983 fatalities were reported overnight in the country, the ministry said. However, the fatality rate dipped below 2 per cent and stood at 1.89 per cent with a total of 54,849 COVID-19 deaths so far. 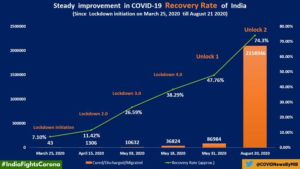 The number of COVID-19 sample testing labs across the country increased to 1504. According to the Indian Council of Medical Research (ICMR), 3,34,67,237 samples have been tested in the country so far, including 8,05,985 on Thursday.

“Testing in India has steeply increased to more than 9 lakh tests per day. This is bolstered with all States/UTs testing more than 140 tests per day per million population as advised by the World Health Organisation (WHO),” the Union Health Ministry said in a statement.