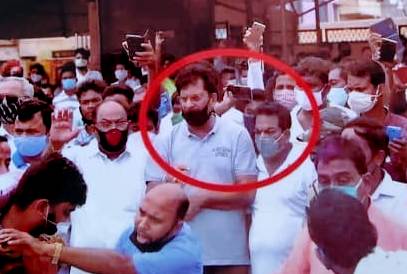 Puri: BJD’s Satyabadi MLA Umakanta Samantaray has been booked for allegedly attending Pipili MLA Pradeep Maharathy’s last rites at Puri Swargadwar on October 4 despite having been tested positive for COVID-19 a couple of days earlier.

On Tuesday, Jagannath Sena had lodged a complaint at the police station, alleging that COVID-19 positive Samantray and Nimapara MLA and School and Mass Education Minister Samir Ranjan Dash attended the last rites of Maharathy posing threat to the thousands of people from and outside the Pilgrim Town.

“No case has been file against the minister since he had attended the funeral 17 days after testing positive,” informed Puri SP Akhileswar Singh.

The minister had also clarified that he had tested positive for the virus on September 14 and attended the funeral in Puri as he had completed 21-day quarantine period.

Refuting this claim, Jagannath Sena convener Priyadarshan Patnaik had told the media that these two MLAs had undergone the 2nd phase COVID test at the State Assembly on September 27 and tested positive for the virus. “According to COVID-19 guidelines, both the leaders should have isolated themselves. Instead, they violated the guidelines and participated in the funeral. The Puri collector had also warned of stern action against COVID-19 patient moving out of the isolation within 17 days,” Patnaik said.

However, Samantaray, who through his social media handle had informed about testing COVID-19 positive on September 28, did not respond to the allegations.

I Have Stopped Taking Medication Eight Hours Ago: Donald Trump