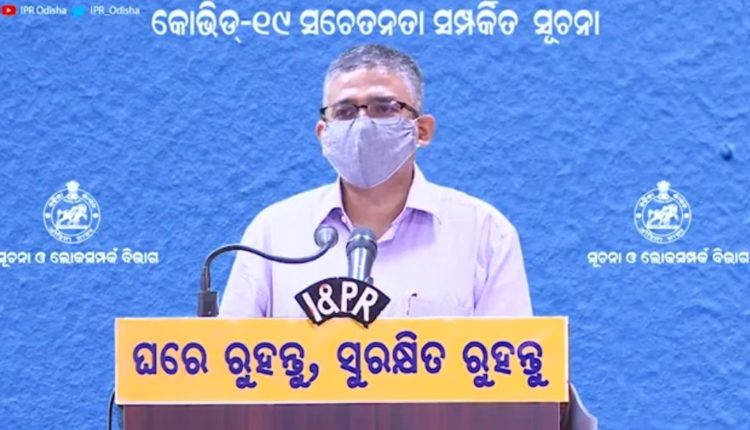 Bhubaneswar: The Odisha government on Sunday claimed that the COVID-19 pandemic in the state is under control.

Briefing the media here, Additional Chief Secretary, Health, Pradipta Mohapatra said the state had recorded the highest daily positive cases of 12,852 on May 22. However, the number of positive cases has gradually come down to below 10,000 in the last 24 hours (9541).

He said although the number of testings had come down in five coastal districts due to Cyclone Yaas, the test positivity rate (TPR) has shown a steady decline.

“The state had the highest TPR of 22% in the second week of May. However, it came down to 19% in the third week, 17% in the fourth week. The TPR count has come down 14.4% in the last 24 hours. Taking the overall TPR in the districts into account, there is a gradual decline in the rate in 19 districts while five districts have less than 5%. We hope that there will be a further fall in TPR in the next 1-2 weeks,” he added.

Referring to the total positive cases in the state, Mohapatra said nine districts of Khurda, Cuttack, Angul, Sundargarh, Puri, Bargarh, Jajpur, Mayurbhanj and Balasore have around 60% of the total cases.

However, he said there are still COVID fears from Andhra Pradesh and West Bengal because of which strict checking and restricted movement along the borders will continue.

On the other hand, a declining trend of coronavirus cases has been noticed in neighbouring Chhattisgarh and Jharkhand the result of which is being observed in Odisha bordering districts where the positive cases are on the decline.

Informing about vaccination progress, Mohapatra said 30% people in 45+ age groups have been inoculated. The drive for 18-44 age group is being carried out in five municipal corporations and six district headquarters of Odisha. “The drive will be expanded to other districts once we get adequate number of vaccines,” he added.