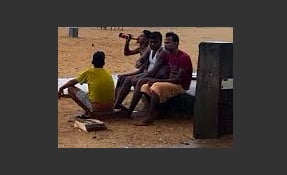 Bhubaneswar: Ahead of the Urban polls, the Commissionerate Police is cracking the whip on public drinking and the all exhilarating Khati (handouts) in Odisha capital.

While 200 people have been fined Rs 500 each for drinking alcohol at public places, temporary khati points at 12 places have been razed to check the activities of mischief mongers and penalties slapped on 92 people in the last 48 hours, a senior police officer informed on Sunday.

Raids are being conducted near eateries, dhabas and outside liquor vends at various places in the city under this special drive.

After a delay of almost three days, the urban poll is slated for March 24.

Also Read: Woman Mayor For Bhubaneswar After 29 Years; Know The 3 Candidates In The Fray