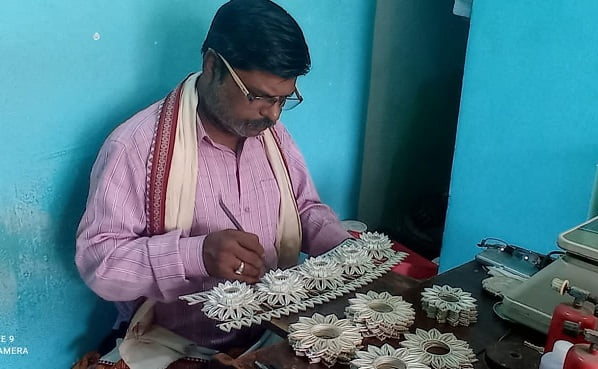 “We had received this order in 2018. This Medha could not be completed due to the COVID pandemic. The Sital Sashthi Puja committee is planning to celebrate the festival with grandeur. We started the Silver Medha work again for Sital Sashthi, which will be celebrated in June 2022,” said Sahoo.

“We have completed almost 70 per cent work of the Medha. Ten to 12 artisans have been engaged in making it,” he informed.

For two years, the artisans did not have any work during the pandemic. They are happy to resume work now.

Sahoo lost his left hand in 2004 but that did not stop wean him away from his craft. Keeping alive his filigree work, he has become an inspiration for others.  What is more, he is the recipient of a National award by the Ministry of Handlooms and Textiles in 1994.

A team of craftsmen led by Sahoo had also made silver filigree mementoes, which were presented to the players during Men’s Hockey World Cup, held in Bhubaneswar.

“I learnt this craft from my father when I was only 14-years-old and I got the national award when I was 25. I was deeply interested in this work but appreciation from others propelled me even more,” said Sahoo.

“We have been struggling for not getting any work in the last two years. This Medha work has brought a smile to our faces. The design of this Medha has been given by late artisan Ramachandra Parida,” said Sahoo.

“We are happy that the demand of filigree work, especially jewellery, is increasing, among the young generation,” he added.