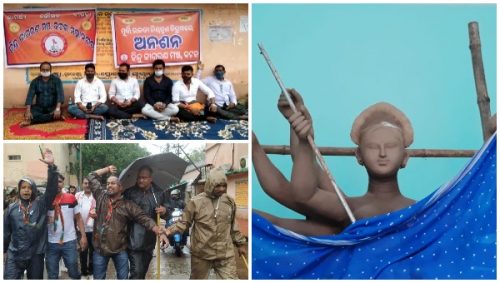 Bhubaneswar: Protests erupted at various places in Cuttack on Wednsday over restrictions on the height of Durga idol. Cuttack Nagar Congress led by Barabati-Cuttack MLA Mohammad Moqim staged a silent protest near Purighat Gandhi statue while members of various social organisations are on ‘fast unto death’ at Machhua Bazaar.

The cap on idol height and closed-door worship of Goddess Durga are against the century-old puja practice and tradition in the city, they argue.

“The government should respect the feelings and lift the unnecessary restrictions. People should be allowed to participate in the Puja freely amid COVID restrictions,” said Moquim.

With the government refusing any relaxation in the height of Durga idols and public darshan in view of the prevailing COVID situation, the Balu Bazaar Puja Committee has filed a writ petition in Orissa High Court, appealing it to direct the government to allow the puja to be held as per the 500-year-old tradition.

“We are worshipping the 8 feet height Durga idol since 1914 and it is not possible to change the tradition,” said its president Suryakant Sanganeria.

In view of a possible third wave, DMET Chief CBK Mohanty cautioned people against any lax during the festive season to avoid a post-Onam situation when COVID cases exploded in Kerala. “If idol height is increased, more people would be required for construction and immersion,” he said while appealing to people to follow COVID-appropriate behaviour.

On Tuesday, Director of Health Services Dr Bijay Mohapatra had cited the example of Maharashtra, Karnataka, Delhi and Tamil Nadu, which had imposed similar restrictions on idol height.

The Madras high court had also reiterated that the right to life supersedes the right to practice religion while disposing of a petition that challenged Tamil Nadu’s order to ban public celebrations of Vinayagar Chaturthi.

A day after the BJP observed a 12-hour band over the issue amid heavy rain, paralysing the city, Union Minister Dharmendra Pradhan on Tuesday had appealed to the government and his partymen to find a solution through dialogue. “With varying views coming from Sahi Committees, Puja Committees, intellectuals and various cultural and social organisations, I earnestly hope that the state government will take all stakeholders along and hold discussion with them once again keeping in mind the feelings of people of the cultural city,” he said.

Notably, Chief Secretary Suresh Chandra Mohapatra and SRC Pradeep Jena had invited a delegation of the Puja committees and Mahanagar Shanti Committee to discuss the issue on September 8. The delegation expected a positive outcome from the meeting but three days later, the SRC reiterated that there will be no change in the August 9 guidelines.