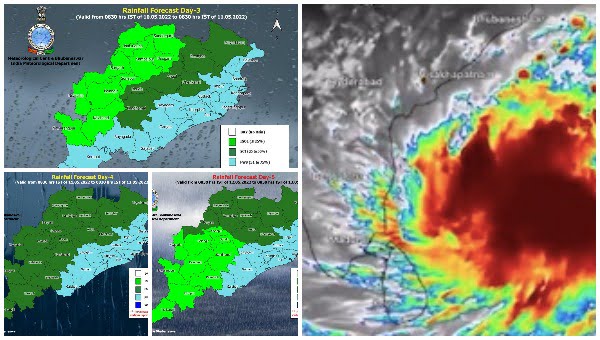 Bhubaneswar: Cyclone Asani, which is expected to move northwestwards and intensify further into a severe cyclonic storm over eastcentral Bay of Bengal during the next 12 hours, is likely is trigger widespread rain along with heavy spells at isolated areas in Odisha, West Bengal and Andhra Pradesh from Tuesday, Indian Meteorological Department (IMD) said on Sunday.

According to the IMD forecast, the cyclone will not only spare Odisha as it is likely to recurve north-northeastwards and move towards Northwest Bay of Bengal parallel to the coast but will also bring down the day temperature at many places in coastal Odisha by 3 to 4 degree Celsius during the next 24 hours.

While there will be light to moderate rain and thunderstorm till Monday, yellow warning for heavy rain has been issued for the next three days. “Rainfall activities will commence in coastal districts from May 10 evening under the impact of the cyclone, which will have intensified into the severe category,” said senior scientist of Bhubaneswar Meteorological Centre Umashankar Das.

Heavy rainfall is very likely to occur at one or two places in Gajapati, Ganjam and Puri.

Heavy rainfall is very likely to occur at one or two places in Ganjam, Khurda, Puri, Jagatsinghpur and Cuttack.

Heavy rainfall is very likely to occur at one or two places in Puri, Jagatsinghpur, Cuttack, Kendrapada, Bhadrak, and Balasore.

Squally wind speed reaching 40-50 kmph gusting to 60 kmph is also likely along and off Odisha coast on May 11 and 12.

Also Read: ‘Asani’ Developing Over Bay Of Bengal! Who Named The Cyclone & What Does It Mean?

TV Shows To Binge-Watch This Sunday

Students Drown In Brahmani, One Missing In Odisha’s Dhenkanal