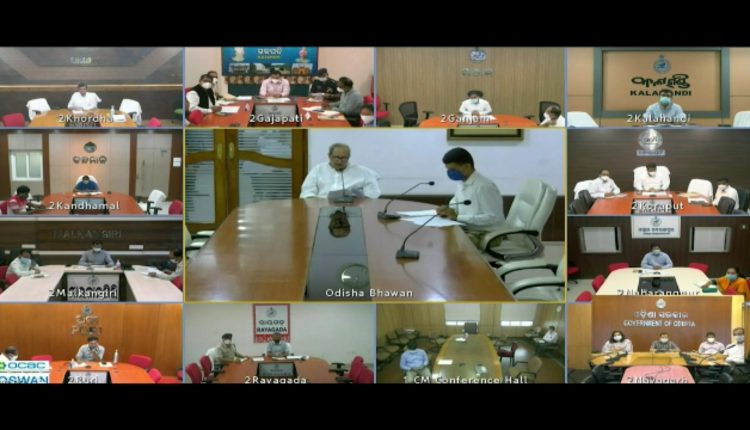 Bhubaneswar: Chief minister Naveen Patnaik on Sunday directed the government officials and all stakeholders to ensure zero casualty in cyclone Gulab that will make landfall tonight.

Reviewing the preparedness for the cyclone with high officials and district collectors through video-conferencing, the chief minister who is in New Delhi on official visit, said all measures should be taken to prevent loss of human lives.

The people living in mud houses and forest areas of the districts to be affected by the cyclone should be evacuated and housed in safe places on a war-footing. A close watch should be kept on the embankments.

He also directed to ensure basic facilities including drinking water in cyclone shelters and protect the pregnant women, children and elderly persons. Stating that the people in vulnerable areas should be alerted through public announcement system about the cyclone, he said PRIs, Mission Shakti, NGOs and volunteers should be engaged in this regard.

Naveen further directed to keep the educational institutions closed in 11 vulnerable districts on Monday. The collectors will take decision on reopening of the institutions depending on the situation.

Reminding the officers of spread of COVID after cyclone Yaas in the affected areas, the chief minister said the COVID protocols must be followed during displacement of the people.

He also told to take up post-cyclone works like clearing the roads and restoration of power and water supply at a fast pace.

Special Releif Commissionr Pradeep Jena said 42 ODRAF teams, 24 NDRAF teams and 103 Fire Brigade teams have been deployed in the vulnerable districts. Adequate masks and santisers have been provided to cyclone shelters, he added.

He further said Ganjam, Gajapati, Rayagada and Koraput are likely to be worst affected by the cyclone Gulab while Kandhamal, Malkangiri, Nabarangpur, Kalahandi, Khurda, Puri and Nayagarh may receive heavy rainfall. Besides, there are possibilities of landslide in some places.

The shifting of the people from vulnerable places is going on and it will be completed by 4 pm, he added.

The collectors of Ganjam, Gajapati, Rayagada and Koraput informed about the steps taken to face the cyclone.

Secretaries of different departments, collectors of 11 districts participated in the meeting while secretary to CM (5T) VK Pandian coordinated.