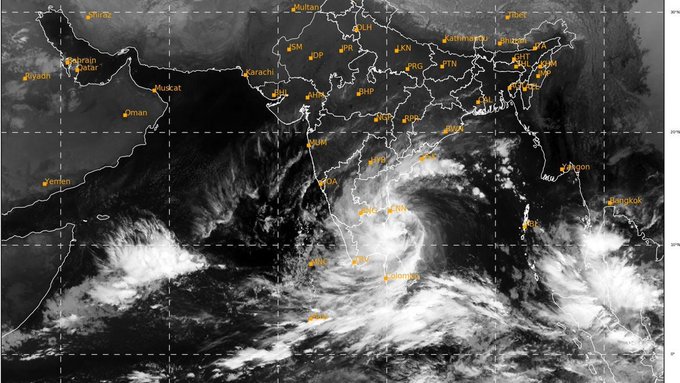 Bhubaneswar: With Cyclone Mandous expected to cross between Puducherry and Sriharikota around Mahabalipuram around midnight of December 9, southern districts in Odisha may experience rain in the following 24 hours, the India Meteorological Department (IMD) informed on Friday.

“Light to moderate rain or thundershower is very likely at one or two places in Malkangiri, Koraput, Nawarangpur, Rayagada, Gajapati, Kalahandi and Kandhamal,” the MeT office said in its midday bulletin.

Dry weather will prevail in the remaining parts of the state.

The IMD has also forecast a gradual rise in the night temperature by 2-3 degree Celsius in Odisha during the next two to three days and no change thereafter.

Notably, coldwave is sweeping Odisha and the mercury plummeted to 10 degree Celsius at seven places in the state with U Udayagiri in  Kandhamal district recording the lowest temperature of 6 degree Celsius.

Also Read: Mercury Dips To 6°C At G Udayagiri; 10 Other Places In Odisha Record 10°C & Below

Meanwhile, a high alert has been issued for three Tamil Nadu districts — Chengalpattu, Villupuram, and Kancheepuram — which are expected to witness heavy rain under the influence of the cyclonic storm. Six National Disaster Response Force (NDRF) teams are also on standby.

Schools and colleges have also been shut in several Tamil Nadu districts.

The storm is expected to weaken this evening and cross north Tamil Nadu, Puducherry and adjoining south Andhra Pradesh coasts between Puducherry and Sriharikota around Mahabalipuram with a maximum sustained wind speed of 65-75 kmph gusting to 85 kmph between midnight of December 9 and early hours of December 10.