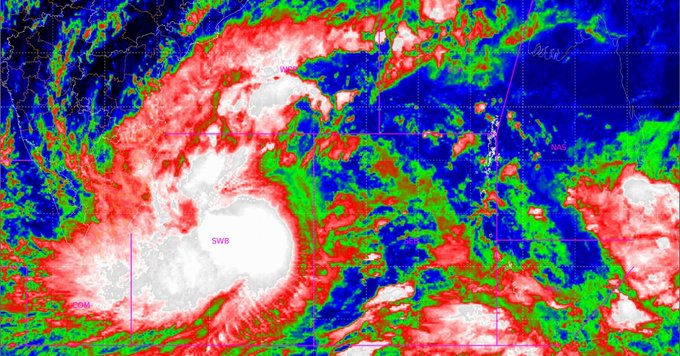 Bhubaneswar: Heavy rain is likely to lash several parts of Tamil Nadu, Puducherry and Andhra Pradesh as cyclone Mandous over the Bay of Bengal is expected to cross the coast between Puducherry and Sriharikota in neighbouring Andhra Pradesh on the midnight of December 9, the India Meteorological Department informed on Thursday.

“The cyclonic storm Mandous (pronounced as ‘Man-dous’) was over the southwest Bay of Bengal is about 500 km off east-southeast of Karaikal and is expected to move west-northwest and cross north Tamil Nadu, Puducherry and adjoining South Andhra Pradesh coast between Puducherry and Sriharikota with a wind speed of 70 km per hour around midnight of December 9,” an IMD bulletin said.

A red alert has been issued for three districts – Chengalpet, Kancheepuram and Villupuram – in Tamil Nadu and for Puducherry on December 9 as some places may get extremely heavy rainfall.

According to IMD, the system will have no direct impact on Odisha. However, light to moderate rain or thundershower is very likely at one or two places in Gajapati, Ganjam, Kandhamal, Kalahandi, Nabarangpur, Malkangiri and Koraput on December 9. rain may continue in Gajapati, Rayagada, Malkangiri, Koraput and Nabarangpur, the following day (December 10).

Dry weather will prevail in the rest of Odisha.

The night temperature in the state is also expected to rise by 2-4 degree Celsius after 24 hours, it added.

Notably, Koraput’s Similiguda was the coldest place in Odisha recording the lowest night temperature at 6.9°C followed by Kirei in Sundargarh at 8.7°C last night. As many as 24 places in the state recorded a minimum temperature below 15 degree Celsius.