Cyclone Yaas: Odisha In The Eye Of Storm, Landfall Likely Between Dhamra & Chandbali 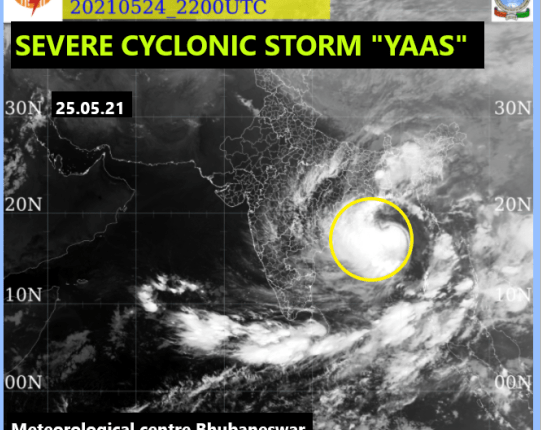 Bhubaneswar: Cyclone Yaas over the east-central Bay of Bengal is likely to make landfall between Chandbali and Dhamra port as a very severe cyclonic storm on May 26, Scientist at Regional IMD Office, Bhubaneswar, Dr Umashankar Das informed on Tuesday.

The European model ECMWF had earlier shown landfall near Dhamra in Bhadrak district at 1 pm on May 26.

IMD DG Mrutyunjay Mohapatra said that the system is likely to intensify into ‘very severe cyclonic storm’ by evening. “Rain has already begun and it will continue. Windspeed in Kendrapara and Jagatsinghpur district will reach around 80 kmph by midnight today,” he said.

Cyclone will cross very close to Dhamra in the early hours of May 26, he added.

He further said that the impact will be high for 6 hours before and after the landfall. “Big trees and electric poles may get uprooted. Chandbali is likely to witness maximum damage due to the cyclone,” he added.

Meanwhile, Chief Minister Naveen Patnaik has directed the Minister of State for Home, Dibyashankar Mishra, to camp in Balasore to monitor the situation.

It is very likely to move north-northwestwards, intensify further into a very severe cyclonic storm during the next 12 hours. It would continue to move north-northwestwards, intensify further and reach Northwest Bay of Bengal near north Odisha and West Bengal coasts very close to Chandbali-Dhamra port by the early morning of Wednesday. It is very likely to cross north Odisha-West Bengal coasts between Paradip and Sagar Island around Balasore, during noon of Wednesday as a very severe cyclonic storm, it added.