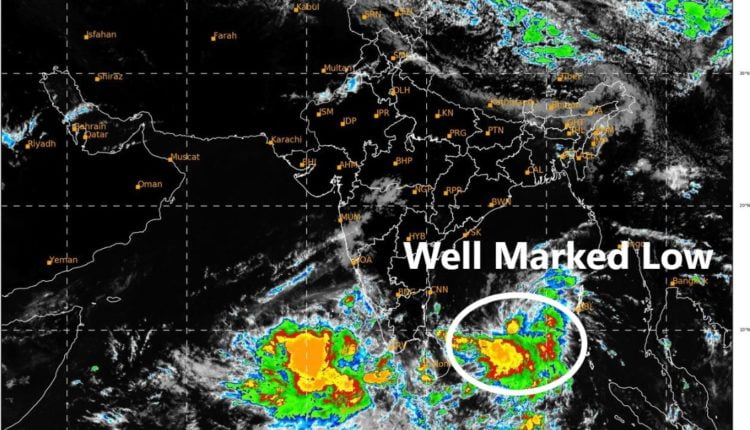 Bhubaneswar: The well-marked low pressure area (LOPAR) formed over the south-east Bay of Bengal and its neighborhood is likely to intensify gradually into a depression by Friday evening and then develop into a cyclonic storm within the next 24 hours, the Centre for Environment and Climate (CEC), SOA Deemed to be University, here said on Friday.

The system is likely to take the shape of a deep depression by Saturday morning and intensify into a cyclonic storm by evening, Dr. Sarat Chandra Sahu, Director of CEC, said.

Preliminary analysis showed that it might move in a northwestwardly direction till Sunday after which its intensification would be vigorous with the system changing direction and moving north-northeastward. It could intensify gradually into a very severe cyclonic storm by May19 evening, he said.

The system is likely to impact the coastal Odisha districts of Puri, Kendrapara, Jagatsinghpur, Bhadrak and Balasore, he said.

Under its impact, moderate to heavy rainfall might occur on May 18 in the districts of Malkangiri, Koraput, Gajapati, Rayagada, Ganjam and Puri while heavy to very heavy rainfall, with extremely heavy rainfall at a few places, was likely in Puri, Jagatsinghpur, Kendrapara and Bhadrak districts on May 19, he said.

Dr. Sahu said many locations in the districts of Kendrapara, Jajpur, Bhadrak, Balasore and Mayurbhanj could experience heavy to very heavy rainfall with extremely heavy rainfall at some places, on May 20.

Moderate to heavy rainfall might occur in the districts of Khurda, Nayagarh, Cuttack, Dhenkanal and Keonjhar on May 19 and 20 under the impact of the system. Wind, speed reaching up to about120 km per hour, could be experienced along and off the Odisha coast from the night of May 19 to the night of May 20, impacting the Puri, Jagatsinghpur, Kendrapara, Jajpur, Bhadrak and Balasore districts, at the later stages of the cyclonic storm.

Fishermen should not venture into the sea between May 17 (evening) and May 21, he said, adding uncomfortable and humid weather was likely to continue across the state up to May 18.

Sec 144 Imposed In Rayagada Ahead Of Migrant Labourers’ Arrival

Low Pressure Over Bay Of Bengal Likely To Intensify Into…