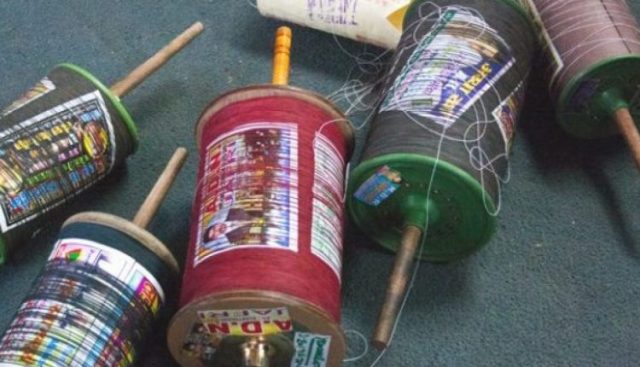 Cuttack: Ahead of Makar Sankranti festival, a huge quantity of the deadly manja thread meant for use in kite flying was seized and one person held by the police from a shop in Odisha’s Cuttack city.

Despite a ban on Chinese Manja, plastic threads and threads coated with fine glass particles, these dangerous materials are available in the market for use especially during kite flying competitions.

Apart from launching an awareness drive to tell people about the hazards of manja thread, the police have also mounted a crackdown on shopkeepers and traders selling these products in the millennium city before Makar Sankranti on January 14, sources said.

During a special operation, a special police quad carried out raids in Choudhury Bazar area and seized a huge quantity of such dangerous manja thread from a shop.

While one person has been taken into custody and detained for questioning, surveillance has been stepped in order to track others selling these products.

To strictly enforce the ban on manja threads, special teams have been formed to inspect the kite shops and take action, if any shopkeeper is found selling the banned items. Those found using such threads for kite flying will also be booked, they added.

It may be noted here that in December 2021, a man had died after his throat got slit by the glass-coated kite string (manja) when he was going on motorcycle with his wife to father-in-law’s place at Pirbazaar in Cuttack city.

Several people have also been injured after getting entangled in kite manja in Cuttack, Bhubaneswar and other places of the state in the last few years.

Cold Wave To Sweep Odisha For Another 2 Days; 6 Districts Under Yellow Warning