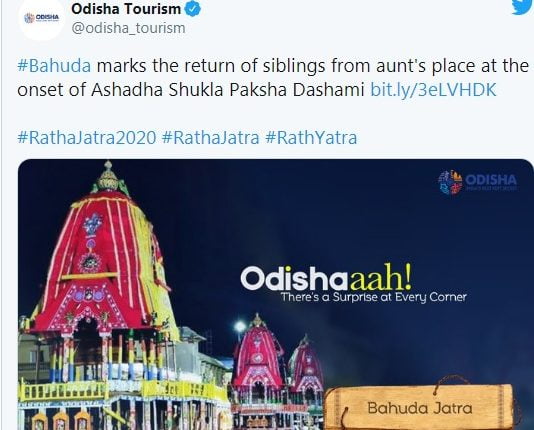 Bhubaneswar: Lord Jagannath and His siblings returned to Srimandir after the nine-day annual sojourn to Gundicha Temple in Puri on Wednesday.

While announcing the Babhuda Yatra of the sibling deities and its significance, Odisha Tourism made a blooper in its post.

“Bahuda marks the return of siblings from aunt’s place at the onset of Ashadha Shukla Paksha Dashami,” the post read.

However, this annual trip is not to their aunt’s place but to the place of their birth.

“Lord Jagannath is part of the collective conscience of the state of Odisha. There is a sense of ‘oneness’ with the Lord who like His devotees takes an annual trip to his ‘Janma Bedi’ or ‘Abhirbhaba Pitha’ (birthplace), the Gundicha Temple, once every year,” said noted author and Jagannath culture researcher Bhaskar Mishra.

The annual sojourn begins with Rath Yatra and ends with Suna Besha after the Bahuda Yatra. Seven of these nine days, the Lord and His siblings spend in this temple, which is 2.7 km away from the Srimandir.

“It was initially a mandap and the temple was built thereafter. It is here that the idols were carved into the shape of the deities and therefore considered the birthplace,” he added.

According to researchers, Gundicha was the wife of mythological King Indradyumna, who in ancient times is believed to have consecrated Lord Jagannath in Puri. The legend has it that Gundicha peeped into a room, where Viswakarma was carving the divine images, out of curiosity. This was in contravention of the condition set by Viswakarma and consequently, the images of the sibling deities remained incomplete.

On their return journey, the sibling deities stop for a brief period at the Mausi Maa temple, where their maternal aunt resides. It is here that they are offered Poda Pitha ( rice cake).

The confusion seems to have stemmed from this and Odisha Tourism has ostensibly fallen into it.