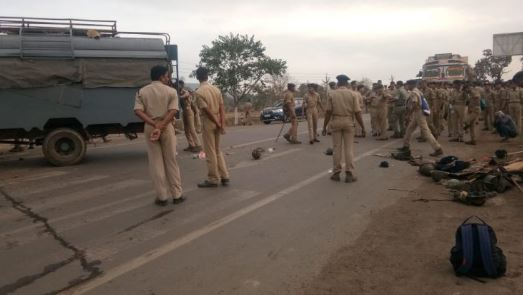 Sambalpur: The death toll in the road accident near Banharpalli in Odisha’s Jharsuguda district went up to three with the death of another personnel of the Odisha State Armed Police (OSAP) at the Veer Surendra Sai Institute of Medical Sciences and Research (VIMSAR) at Burla on Monday morning.

The deceased has been identified as Biprab Sahu, a native of Gajapati district.

Two personnel, identified as Prasant Behera and Shankar Prasad Panth, had died on the spot in a van-truck collision which took place at 6.30 am on March 1 near a filling station on National Highway-49 near Belpahar.

Following the incident, Chief Minister Naveen Patnaik had announced ex-gratia of Rs 5 lakh each to the next of the kin of the deceased and a government job to one family member. He had also ordered free medical treatment for all the injured jawans and announced financial assistance of Rs 1 lakh for the injured if threatened with disability.

The 28 injured OSAP jawans are undergoing treatment at VIMSAR and Bhubaneswar.