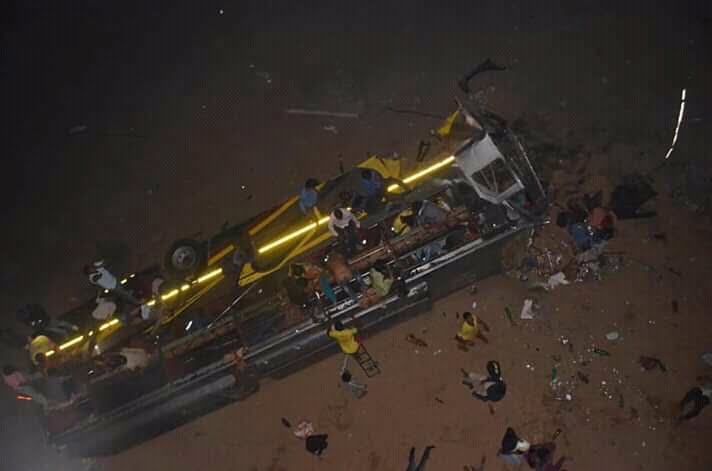 Cuttack: The death toll in the Mahanadi bridge mishap in Cuttack on Tuesday evening has gone up to 10.

“Of the 50 injured passengers, 35 have been admitted to the Disaster ward and seven passengers to the ICU, of which three are in the Central ICU and four in the Coma ICU. The remaining eight persons have been admitted to different private nursing homes by their family members. The condition of the seven critical patients would be known after 72 hours,” he added.

Stating that the treatment of 35 patients are underway in the Disaster ward free of cost by a team of doctors of the surgery, neurosurgery, orthopaedics, plastic surgery and cardiothorasic departments as per the direction of the state government, Maharana said if the condition of any patient in the ward deteriorates, he will be admitted to the ICU.

The Emergency Officer said that following the information about the tragic mishap, the superintendent of the hospital had formed a team of doctors in the evening.

He further said that the hospital superintendent this morning had informed the police to complete the postmortem of the 10 bodies. “The postmortem has been completed after which the bodies will be sent to the houses of the family members free of cost as per the direction of the district administration,” he informed.

Present at the hospital, local MLA, Pravat Biswal said that he has spoken to the district collector to make specific provision for a mandatory speed control of the vehicles on Mahanadi bridge so that such tragic incident does not occur in future.

He also said that the issue would be discussed in the current winter session of the State Assembly.

Meanwhile, the district administration has provided three helpline numbers to furnish detailed information to the families of the dead and injured passengers. The helpline numbers are 0671-2431921, 7008940019 and 9437207589.