Deba Snana Yatra: Pahandi Rituals Of Lords To Begin At 1.30 AM 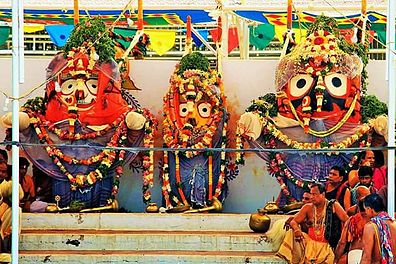 Puri: The Shree Jagannath Temple Administration (SJTA) has announced the schedule of pahandi (procession) rituals of the Triad to the snana mandap (bathing altar) of Jagannath Temple here during the Deba Snana Yatra on June 24.

Daitapati Nijog secretary Durga Prasad Mahapatra informed that the pahandi of the Lords will begin at 1.30 am and conclude by 4 am.

The decision was taken at a meeting presided over Puri collector and deputy chief administrator, SJTA, Samarth Verma with the Daitapati Nijog on Friday night.

Mahapatra said the schedule of other rituals after the pahandi of the Lords will be approved by the Chhattisha Nijog in the next meeting.

The same number of Daitapati sevayats, engaged during the Snana Yatra last year, will perform the rituals this year with adherence to the COVID-19 protocol, he added.